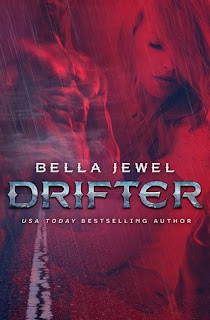 Drifter is the second full-length novel and the latest release in bestselling author Bella Jewel's highly addictive MC Sinners Next Generation series and it's the one book in both the original and the spin-off series that has a different feel to it. The main characters, Mercedes and Diesel, are both college students in Denver and I'm assuming are both twenty-one (well, I'm sure Mercedes is twenty-one and I'm guessing Diesel is about the same age), so this is more new adult (NA) than everything that came before it in the MC Sinners universe. The tone is much younger and while there is still that heavy feeling of angst and drama, there's also more of a playfulness, courtesy mostly of Mercedes. Also, readers witness both Mercedes and Diesel trying to create a life away from their respective clubs, which in itself is unique since the books before were about at least one main character dealing with MC life.

Mercedes and Diesel first meet after a gig his band plays and they share one unforgettable kiss...well, at least it was unforgettable on Mercedes's part. Diesel doesn't seem to have any recollection of either the kiss or of Mercedes herself. He's a complete jerk and treats her as if he can't stand being in her presence. And while she admits that his behavior can be deplorable, Mercedes glimpses a different side to Diesel, a side that he keeps buried deep behind a cold, unaffected exterior. Attraction aside, she wants to be his friend, but there's a reason why Diesel keeps her at a distance: his family belongs to the Jokers' Wrath MC and he doesn't think someone like Mercedes should be touched by that kind of life. The thing is, Mercedes is more than familiar with the club life, but how can she tell Diesel the truth when she's more than aware that two people from opposing clubs don't belong together? Right?

Honestly, I wasn't sure how I was feeling about this sequel because it did fall under the NA romance genre. I love reading NA, but because the other stories in the original and spin-off series had a more mature theme. But as Mercedes and Diesel's story played out, it was difficult to resist their pull. They were facing a different kind of problem and maybe a lot of it had to do with their being young and wanting something else for themselves but also not wanting to disrespect their families' and clubs' legacies. Speaking of legacies, I read the original MC Sinners series to prepare for this spin-off series, but I had no clue one other MC was going to come into play and after finishing this second in a series, I'm itching to get my hands on the Jokers' Wrath MC series to satisfy my bookaholic curiosity. I loved Drifter and hope Danny and Skye, who so belong together, get their happily-ever-after next. Five stars! ♥