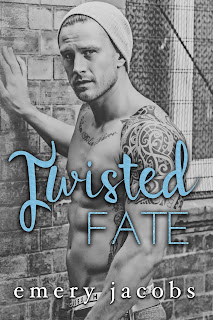 Note: This ARC was provided by Sassy Savvy Fab Promotions in exchange for an honest review.

Twisted Fate is the debut release from Emery Jacobs and is a new adult (NA) romance about Jovie Blake, a nineteen-year-old college freshman and part-time waitress, and Jack (whose last name was never mentioned, but if it was, please feel free to leave me a comment and let me know what it is!), a twenty-seven-year-old artist of both tattoos and paintings. Jovie relishes being back in Houston, Texas after her family moved to Brownsboro, Georgia seven years ago. She's free from her parents over-protectiveness, but her anxiety attacks continue to plague her and she wants to be free from those as well. Jack no longer believes in committed relationships, not after he caught his last girlfriend cheating on him with one of his friends. Now, all he's up for are hook-ups with fuck buddies...then he meets a blue-eyed girl named Jovie.

It was pretty easy to figure out what the twist in the story was going to be (it helps that I'm an overthinker) but I was still anxiously awaiting when it would be revealed. The story is told from both Jovie's and Jack's viewpoints, with flashbacks that let readers know what was happening with Jack before his life was irrevocably changed about eight years ago. There's an eight-year age difference between the two but surprisingly enough (and in a totally good way), it was never a factor in the story. This was really about their own personal issues and unexpectedly falling for one another. There's a bit of abruptness between chapters 31 and 32, but other than that, the story was paced well, and includes some supporting characters I wouldn't mind reading more about should the author decide to do a series. Twisted Fate gets four stars. ♥