Review: The Sins That Bind Us by Geneva Lee 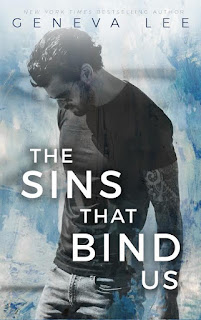 The Sins That Bind Us is a standalone contemporary romance by bestselling author Geneva Lee and is my very first read from her. This was a novel that tackled substance abuse and addiction and at the forefront was Faith Knox, a single mother of a four-year-old son whose deafness was the result of years of drug use. She's turned her life around and is trying to create the best possible life for little Max and she diligently attends her Narcotics Anonymous meetings at a local church in the place she's adopted as her hometown. There she unexpectedly meets Jude Mercer, and from their very first meeting, she knows that he could become an addiction that she doesn't need right now but what she does know is that she wants him and the feeling is mutual. But Faith and Jude aren't being truthful, and their lies and sins could destroy their bond.

This is another one of those reviews where I wish I could tell you specifically why this book surprised the heck out of me, but if I do that, it's spoiler-ville and this is the kind of book that you really need to sink your teeth into in order to fully appreciate it. Faith and Jude are drawn to one another, and while they're both keeping secrets from each other, Faith's are much more intriguing and when the truth is revealed in the book, I had to go back and review previous chapters to make sure I wasn't missing anything. I honestly never saw the twist coming and because that's a rarity in my case, I wish Geneva Lee could see me giving applauding her plotting. Faith's indecisiveness does become frustrating after a while but I loved Jude and felt he deserved far better from her. Overall, The Sins That Bind Us was an emotional, four-starred read. ♥

Purchase The Sins That Bind Us on Amazon | B&N.