Cover Reveal: In Sickness and in Elf by AE Jones

March 29, 2016
I've got the cover for award-winning author AE Jones's upcoming release, In Sickness and in Elf, which is the first book in her new Paranormal Wedding Planners series, to share with all of you today, plus you can pre-order it as early as today via any of the three e-retailer links provided: 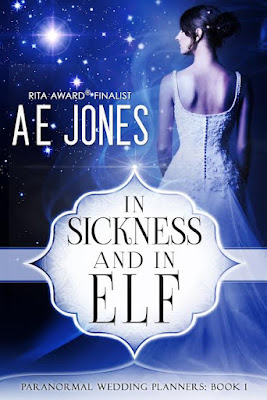 In Sickness and in Elf
(Paranormal Wedding Planners #1)
by AE Jones
Release Date: May 2, 2016

About In Sickness and in Elf
First in a new series from RWA Golden Heart® Winner and RITA® Finalist, AE Jones

Meet Alex Bennett—wedding phobic in a family of wedding planners. Not the best combination, but being left at the altar can wreak havoc on one’s self-esteem. When Alex’s grandmother requests her help with a high-profile wedding, Alex sets aside her fears to attend. But when the bride runs away, and her grandmother’s business faces ruin, Alex will do whatever it takes to uncover the truth. Even when the truth leads to sabotaged weddings and a runaway bride who isn’t human. The last thing Alex needs to deal with is the overbearingly handsome man brought in to lead the investigation.

But with humans and supernaturals bent on destroying each other, Alex and Devin must put aside their differences and work together. Can Devin protect Alex and defeat the enemy without his powers? And now that Alex knows supernaturals do exist, can she once again believe in a fairy-tale happily ever after? 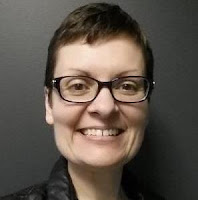 Growing up a TV junkie, award winning author AE Jones oftentimes rewrote endings of episodes in her head when she didn’t like the outcome. She immersed herself in sci-fi and soap operas. But when Buffy hit the little screen she knew her true love was paranormal. Now she spends her nights weaving stories about all variation of supernatural—their angst and their humor. After all life is about both…whether you sport fangs or not.

AE lives in Ohio with her eclectic family and friends who in no way resembles any characters in her books. Honest. Now her two cats are another story altogether.