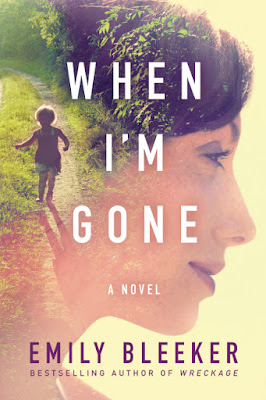 Luke Richardson has returned home after burying Natalie, his beloved wife of sixteen years, ready to face the hard job of raising their three children alone. But there’s something he’s not prepared for—a blue envelope with his name scrawled across the front in Natalie’s handwriting, waiting for him on the floor of their suburban Michigan home.

The letter inside, written on the first day of Natalie’s cancer treatment a year ago, turns out to be the first of many. Luke is convinced they’re genuine, but who is delivering them? As his obsession with the letters grows, Luke uncovers long-buried secrets that make him question everything he knew about his wife and their family. But the revelations also point the way toward a future where love goes on—in written words, in memories, and in the promises it’s never too late to keep.

Read my four-starred review of When I'm Gone.

Add When I'm Gone on Goodreads.

Emily Bleeker is a mom of four, an author, and Chicagoland native. Her first novel, Wreckage, was released by Lake Union Publishing March 2015. Her second book, When I'm Gone, hit shelves March 2016.

She's learning to balance life as a stay-at-home mom with her life as a writer. Both come with a lot of laughter, tears, and a shocking amount of Diet Coke.