Review: Dare Me by Rebecca Shea (Dare Me #1) 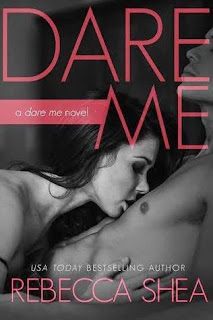 
Dare Me is the first book in bestselling author Rebecca Shea's new series with the same title and uses the office romance trope rather well, with two lead characters who end up confronting issues both inside and outside the workplace. Saige Phillips, who at twenty-three finds herself working at one of the top aviation companies in the country and in the city that she's always loved, has never been able to resist a dare. When her friends at work dare her to ask their boss, thirty-two-year-old Holt Hamilton, out for a drink, the last thing she expects is for him to quickly say yes. If she knew how long he's been taken by her, maybe she wouldn't be as surprised, and when Holt goes full throttle on pursuing something more than a one-time thing, Saige is both wary and excited. She knows all too well how painful it is to lose someone you love, and she doesn't think she's ready to chance a repeat should she given in to how Holt makes her feel. Holt knows how he feels about Saige and wants nothing more than to plan a future with her, but can he do that when he's hiding one part of his past?

Fast-paced and slightly veering away from the expected, this was a highly enjoyable read, and one that I was able to finish in about an hour and a half. Saige and Holt have been aware of just how the attractive the other one is, but neither does anything about it until the night Saige is dared by her friends. When it's just the two of them, they're comfortable, but it's easy to understand why Saige would worry about potential problems at work. The story is simple but has just enough complexity to it to keep things interesting. I did notice, though, an inconsistency: It's been a decade since Saige's father died and her family moved to North Dakota when their financial trouble started and she was twelve then, but Holt states that he was nineteen at the time, but wouldn't he have been twenty-one? Other than that, the story played out well and I hope my favorite supporting characters get their time in the spotlight as the series progresses, specifically, Rowan, Brent, Evelyn, and Jack. Fun but not frivolous, Dare Me stands on its own while setting the pace nicely for the rest of this series. 4.5 stars. ♥