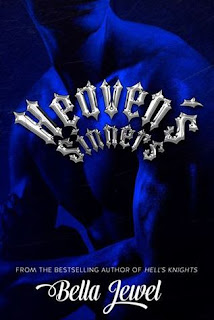 Heaven's Sinners is the second novel in bestselling author Bella Jewel's MC Sinners biker romance series and it takes place soon after the events in the series starter, Hell's Knights. Readers already met twenty-nine-year-old Spike and twenty-three-year-old Ciara in the previous book, but we get to know the former best friends up close and personal here and learn more about the tragedy that further splintered their friendship. Spike is the president of the Heaven's Sinners MC while Ciara's sister was Spike late wife who was carrying their unborn child when she was murdered by a common enemy of Spike's motorcycle club and the Hell's Knights MC. I'm going to highly recommend that the books be read in order for overall story arc development purposes, and hey, the books in the series are fun, albeit rather intense reads with characters dealing with major issues, so they're quite entertaining.

Spike and Ciara were friends who developed feelings for one another, feelings that neither one of them brought up and both assumed was one-sided and may risk wrecking their friendship. Spike's relationship and later marriage to Ciara's sister fractured that friendship and the sister's death would be what causes them to part ways acrimoniously. When Ciara gets to the point that she wants to be friends with Spike again, he is no longer the Danny she used to know and he makes it clear he doesn't want anything to do with her. There are a lot of heavy and deep feelings that go one between the two of them--both positive and negative--and while there are times that it feels as if they're purposely trying too wound the other with thoughtless barbs and angry actions, Spike and Ciara could only pretend that the other one didn't matter for so long. Theirs was a second chance romance of epic biker proportions.

It's easy to understand why Spike was buried in so much anger and guilt, and my heart broke for Ciara every single time he pushed her away, but this really was a case of fighting for the love that you have and hoping that, in spite of the dangers and challenges, it'll win out in the end. Admittedly, I liked this book a tad better than I did the first one, and a lot of it has to do with me liking both Ciara and Spike, which I did from the get-go. There's a great deal of history--both good and bad--that existed before their paths even crossed again in the latter portion of the first book, and nothing came easy to either of them here in the second book either. The main characters have numerous emotional highs and lows, but going along and staying on the roller coaster ride with them was worth it. 4.5 stars for Heaven's Sinners. ♥