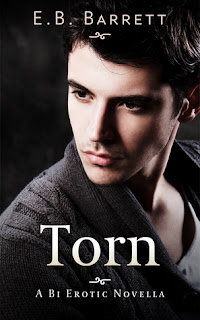 Note: This ebook was provided by IndiGo Marketing & Design in exchange for an honest review.

Torn is a novella from author E.B. Barrett and is about college graduate James Stevenson and his journey of self-discovery and self-acceptance. Funny enough, I read this book soon after having finished a book that had a main character who hid his sexuality. That book made me think about the immense pressure put upon people to slap a label on their sexuality, almost as if it's necessary for them to be one thing or another because that's the norm. Then I read E.B. Barrett's novella and it was refreshingly different, with a main character who learned things about himself--things that gave him pause and made him ponder--and found love and acceptance and came to the realization that he didn't have to compromise who he was to be happy and feel free in his own skin.

Readers get a bit of history as far as James's intimate life is concerned and he appears to have a tendency of falling for people who don't feel the same way he does for them...or so he thinks. From his long-term relationship with his now-ex-girlfriend Amee to his exploration of his bisexuality and to his taking a chance on the one man he hopes will love him back, I felt as if I was an avid observer of James's story, almost voyeuristic at times. His isn't an overly angsty tale but more of a thoughtful one. There's purpose in anything and everything he does, and as intelligent he is and as successful as he becomes at such a young age, I wanted to give him a hug a time or two whenever doubt or insecurity would have him hesitating to go after what he wanted in his personal life.

The writing in this book was amazing, with the author never underestimating what her readership can handle. Bisexuality is often misunderstood but here, it's been presented more than one third-person point of view. Some people think it's simply impossible for a person to be attracted to both men and women, but then that's like saying it's impossible for a heterosexual individual to be attracted to more than one member of the opposite sex. This novella has a really good story with a strong cast of characters led by James, my favorite being Professor Joshua Thomas, and it's one that I would highly recommend. An intelligently written book, Torn was wonderfully insightful and one that deserves to have a wider audience. This great read gets 4.5 stars. ♥