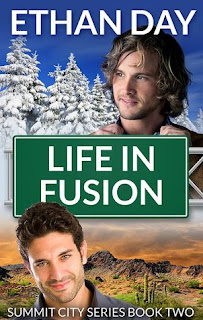 Life in Fusion is a full-length novel and the second book in the Summit City series penned by Ethan Day. This sequel picks up where the series starter novella left off. Boone Daniels and Wade Walker had what was supposed to be nothing more than a one-night stand. After all, Boone was in Summit City thinking he was going to celebrate his first anniversary with his boyfriend only to find out that it was an opportunity for his now-ex to dump him while trying to not feel guilty about it by treating Boone to a vacation. Who'd have thought Boone and Wade's connection would be as strong as it was and that it would leave both of them wanting to pursue something more? The hiccup, of course, is a major one. Boone has known no other home than Albuquerque, New Mexico, and Wade lives in Summit City, Colorado. They had separate lives before they met, but maybe what they need to do is merge those lives together. Six months before making the move should be more than enough time, right? And while many will say happy endings are only in story books, Boone and Wade intend to have their own. Easier said than done...

After my so-so reading experience with the introductory novella, I was hoping that this next book in the series was going to be, at the very least, a more positive one. For all intents and purposes, this turned out to be a pretty good read. Boone and Wade seemed to have really easy in the first book, and now we find them being tested, no thanks to the literal distance between, which tends to bring out emotional kind of distance to a certain degree. Boone is just as in your face as ever, and once again, this was enjoyable until it was not. Too much of a good thing and all that jazz. Don't get me wrong. I love witty one-liners and humorous zingers, but when that becomes the majority of one's responses in a conversation, it can become wearisome. Other than that, however, I liked the actual story and seeing both these guys--though Boone more so than Wade--develop more as main characters. I'm curious to see if a couple of the supporting characters will be getting their own spin-off stories told later on since I already know book three, Life in Union, will continue Boone and Wade's tale. We shall see! Life in Fusion garners four stars. ♥

Read my reviews for the Summit City series:

Purchase Life in Fusion on Amazon.