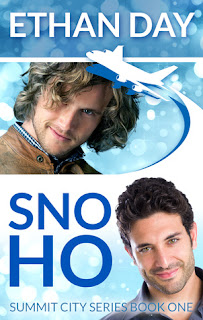 Sno Ho is a novella that kicks off the Summit City series, and it serves as my introduction to Ethan Day's writing. Boone Daniels may have flown to Denver, Colorado in order to head to Summit City to celebrate his one-year anniversary with his boyfriend, but finding out that this was a solo send-off to splitsville has Boone wishing he could head back to his hometown of Albuquerque, New Mexico to avoid further humiliation. But hey, everything's been paid for and his ex insists that Boone enjoy his vacation--after all, this was how his ex had planned the whole trip to turn out. The one thing that wasn't planned for was Boone getting drunk and hooking up with a buffed-up stranger--a stranger who turns out to be Summit City's favorite son: celebrated and medaled athlete, Wade Walker.

This romantic comedy was a lighthearted read, one that ends on a cliffhanger of sorts. It does its job in terms of introducing readers to the main characters who are featured throughout the series--there are two full-length novels after this one--as well as the townsfolk of Summit City. I liked that I wasn't forced into believing Boone and Wade were madly in love with one another in the short amount of time they were together. They were definitely in like and in lust, but any sort of future together was, well, hanging in the balance. There were times that I caught myself smiling at the antics of these two, although to be honest, there were moments where it felt like Boone was trying too hard to be witty and funny. I appreciated the story that the author was trying to tell, and I'm curious as to where Boone and Wade are headed in their relationship and how the town'll be involved Sno Ho gets 3.5 stars. ♥