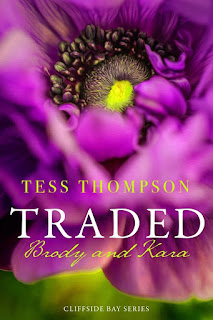 I read Tess Thompson's Blue Mountain books back in 2015 and loved both her writing style and the creativity and warmth she puts into her stories. So, when I found out that she had a new contemporary romance series in the works, reading it was a no-brainer. Set in a small California town called Cliffside Bay, which also happens to be the title of the series, the books are about a group of five friends nicknamed The Dogs--football superstar Brody Mullen, general practitioner Jackson Waller, bar owner Zane Shaw, real estate developer Kyle Hicks, and hedge fund manager Lance Mullen (who also happens to be the younger brother to Brody). It kicks off with Brody's story.

Finally winning the Super Bowl is a bittersweet achievement for thirty-year-old quarterback Brody Mullen. He wishes his beloved father were still alive to witness Brody's win, and at his age, Brody knows his body can only take so much more physical strain. When he learns that the family's housekeeper whom Brody considered a second mother had a brain tumor and that his mother was sinking into a depression, getting a live-in caregiver became a necessity. Twenty-nine-year-old Kara Eaton is an over-qualified nurse practitioner with a dark past who gamely takes on the challenge of being a caregiver AND housekeeper. The one challenge Kara isn't prepared for is Brody...

Confession time: I was NOT a fan of Kara's in the first few chapters of the book. I get that he was the star quarterback for a rival football team, but she didn't merely dislike him because of that. Nope, she was quite judgmental of the guy without ever having met him. Thankfully, Kara slowly but surely won me over. On the other hand, I really liked Brody, although if I'm being totally honest here, there were a couple of times, I wanted to smack him upside the head, especially during one conversation he had with his mom about dating again. Sigh. Seriously, man, the world doesn't revolve around you! Grrr! But Brody was a good son, friend, and brother, so he gets a pass.

I touched on this earlier, but Kara does have a bit of past, and it's one that she's forced to keep secret. How that plays out, especially given that there's a hint of danger and suspense connected to what happened to her plus Brody was the victim of a woman's deception and that's made him wary, is something I won't get into (READ THE BOOK!), but it was definitely one of my favorite elements of the book. The romance, Brody's friendships with the rest of the Dogs, his relationship with the two important women in his life, and Kara starting a new life combined with Tess Thompson's spot-on writing were all part and parcel of why Traded: Brody and Kara is a five-starred read. ♥