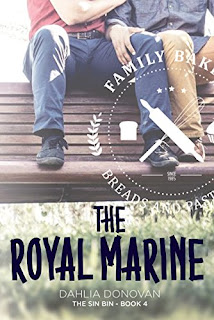 The Royal Marine is the fourth book in the Sin Bin series and the third full-length novel in Dahlia Donovan's collection. Like the book before it, neither of the main characters, Akash Robinson and Hamish Ross, are rugby players, retired or active, but there are rugby players in the cast--Boyce "BC" Brooks (from The Wanderer), Taine "Tens" Afoa (from The Caretaker), and Caddock Stanford (from the non-Sin Bin standalone, After the Scrum) plus Remi Chardin (who is married but not gay) and Scott Monk (whose has his own story told in The Unexpected Santa and The Lion Tamer), as well as a few other familiar recurring Sin Bin supporting characters.

Akash Robinson is someone who taps upon both his Indian and British heritage to create baked concoctions that have people craving for more. He's got a good life, and things appear to get even better, all thanks to a budding romance with former Royal Marine turned security specialist Hamish Ross after an unforgettable blind date. But things start to go awry when too many well-meaning (and some not so much) family and friends think they know better, then there's someone who wants Akash to be his, but it's an unrequited sentiment. With the ten-year difference and a lot happening in both their lives, will they be able to cook up a royally happy ending?

I confess, it took a good, long while for me to really get into Akash and Hamish's story. I wasn't as taken by either of them as much as I was with the first three books, and I don't know if it was because I was distracted by Akash's "admirer" (who I won't be naming in this review because I don't want to spoil it for anyone who has yet to read the book) as well as the other supporting and peripheral characters. I do think that both Akash and Hamish had interesting back stories, and they were truly likable main characters. I simply didn't take to them as quickly and as enthusiastically as I did those that came before them, so I'm giving The Royal Marine 3.5 stars. ♥