Review: Remember Me When by Brooke Blaine (Unforgettable #2) 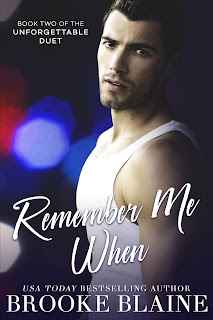 Have a couple of weeks ever felt as long as when you're impatiently waiting for the conclusion to a duet whose first book took hostage of your heart while you were reading it? Yep. I confess, I may have been mildly tempted to hop on a plane and head on over to Brooke Blaine's home and sit outside her front door to remind her that I was waiting. Stalker much? Anyway, I waited, and in the amount of time I was going to have to wait, I was anxious because Forget Me Not was so good, and I desperately wanted--NEEDED!--Remember Me When to be just as good as it's predecessor. The thing is, that's not what the author's given us here. Nope. This? This was, if you could believe it, even better. Book two was the Unforgettable ending that Ollie McFadden and Reid Valentine deserved.

Hold up! If you've yet to read Forget Me Not, I'm warning you right now that this part of my review may contain spoilers. So, if you want to keep on reading, do so at your own peril! Don't worry, it's not as ominous as I'm making it sound. You'll probably be a wee bit ticked off if you decide to push on, but that's on you, dear fellow bookaholic. And if you haven't picked up on it yet, yes, these two books are NOT standalones. They need to be read one after the other. Book one ends on a cliffhanger, and book two will be most enjoyed if you know how Ollie and Reid got to the point they're at when it opens. Still ready to go on with my review? Well then, let's get a-moving, shall we?

This sequel picks up a little over three months from where the duet starter left off. Reid remembers his life prior to the car accident that led to his original bout with amnesia, but he can't recall everything that happened between his first hospital stay and his second one, which required him to undergo surgery. And Ollie? Well, he's the one who remembers everything, including the fact that both he and Reid have been a couple and are in love. Stories like this make me wonder who has it worse: the one who can't remember or the one who remembers it all? And that's just one of the reasons why this was such a heartrending read. Reid is angry and frustrated because who wants to wake up and realize that there was a part of their lives, regardless of the length of time. Ollie is dealing with his heartache, but will he keep the promise that Reid asked him to make before the surgery?

Ah, Ollie and his Bluebird had me from the get-go. From Ollie's crush on Reid during those coffee runs at Joe's to the ending that surpassed even my own high expectations, the Unforgettable duet has lived up to it's name. This story of two men who found then lost then fought to re-discover a love they'd never had with anyone else was sugary sweet while also being scintillatingly sexy. While it may have seemed Blaine made it easy for these two to fall in love in book one, the hurdle before them in book two was a substantial one and if they were going to make it, then one would have to be patient and bide his time while the other had to push through what his head thought he knew and what his heart wanted him to remember. While I'm giving Remember Me When five-plus stars, I'm also going to remind you to read Forget Me Not first. One doesn't work without the other. Just like Ollie and Reid. ♥

Read my reviews for the Unforgettable duet:

Forget Me Not (book one) - five stars - My Review

Purchase Remember Me When on Amazon.