Review: Love on a Battlefield by Posy Roberts 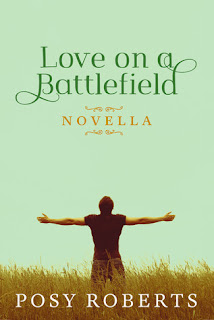 Love on a Battlefield is a novella from author Posy Roberts, and it's about two young men who met at eighteen, forge a connection of a lifetime, only to have no choice but to go their separate ways. Texan Andrew Summers and Californian Shep Wells notice each other across a field--a cornfield, to be precise, one that played the real life set of an annual reenactment of the Civil War. Andrew used to hate going with his father to these things, that is, until he met copper-haired and wholly distracting Shep. But they're at the cusp of adulthood, and they both have paths that they were meant to follow, whether it be one of their own or something forced upon them. Over five years, they keep their connection going, exchanging letters as they both leave the country--Andrew to fight a war in a hell made of sand and Shep to trek the globe. When the time comes to see each other again, will love finally win out?

This was a sweet and oftentimes poignant story, with my one gripe being that I wish there were more letters from Shep for me to read. For a quickie read, readers get to know Andrew rather well, given that the story is told from his third-person perspective. It would have been nice to get to know Shep even more, but there's enough about him to show that he's a good guy who was as smitten with Andrew as Andrew was with him all those years ago. I don't really see this as a second-chance love story. If anything, this was a story about the two young men finally getting a true chance to explore the feelings that rooted within them on that cornfield and to see if they were always meant to be. Love on a Battlefield is my seventh book from the author, and Posy Roberts has quietly but consistently written stories that have left me satisfied. This novella was a sweet and sentimental four-starred read. ♥

Purchase Love on a Battlefield on Amazon | B&N | iBooks | Kobo.