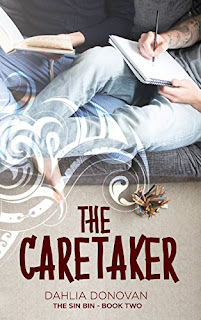 The Caretaker is the second book in Dahlia Donovan's Sin Bin series, and is the story of twenty-six-year-old nurse Freddie Whittle, who was introduced in the first book. Reading book one isn't necessary in order to enjoy book two, but there are recurring characters, and neither is excessively long, so feel free to read them in order.

Freddie Whittle has moved to Cardiff but life is less than idyllic. With bigoted neighbors and a personal life that would bore anyone to tears, Freddie wants the kind of relationship his fathers have. Instead, his life is all about taking care of his patients in the oncology department and his love for cheese. Then Freddie meets Taine Afoa.

Retired at forty-two, international rugby player Taine Aofe is hoping for a more laidback life, although he doesn't hold out as much hope when it comes to finding someone to share that life with. He's utterly smitten with Freddie who's sixteen years his junior, but will the man who cares for others care for Taine's love for kink?

Taine and Freddie were an interesting couple, and I enjoyed reading about how their relationship developed. Their pairing may have seemed odd, but they were clearly what the other needed even if it took a while for them to realize it. With a strong supporting cast of characters, The Caretaker proved to be a 3.5-starred read.