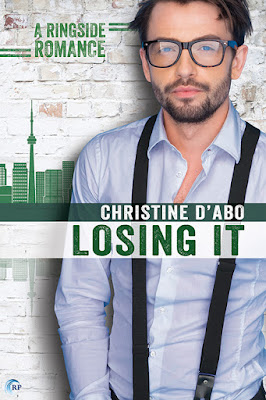 About Losing It
Finn Miller doesn’t do social. He works his IT job from home as often as he can to avoid people. If it weren’t for his weekly training sessions at Ringside Gym, he might never leave his apartment. And he only does that because of Leo, the gym member he’s in love with. When Finn gets talked into attending a speed dating fund-raiser at the gym, his greatest wish is to have the courage to try to say something—anything—to Leo.

Justin McCormick has spent most of his adult life being used, whether playing a corporate heavy, or acting as guard dog for his ward. So when he leaves Vancouver for a fresh start in Toronto, he doesn’t quite know what to do with himself.

The moment Justin sees Finn at a speed dating event, he knows there’s no way he’ll make it without a little help, so he offers to coach Finn on the art of conversation. What he doesn’t count on is his unexpected attraction to this shy boxer, or his fear that if Finn gets his way, Justin might lose out on his best chance at love.

Add Losing It on Goodreads.

Deep in the heart of Toronto lies Ringside Gym. Once a safe haven for troubled teens, Ringside has gone derelict, a forgotten memory of past days. Until a group of friends set out to do what they can to bring life back to the ring and create a new home for LGBT youths.

But when their lives threaten to pull down their dreams, each man must turn to others to help make it a reality. Winners take all—but there are no losers in love.

A Note from Christine d'Abo
Hello, my name is Christine d’Abo and I’m so happy to be here today.

All things, no matter how good and loved, must eventually come to an end. When I originally planned to write my Ringside Romance series, it was only going to be three books. But then my lovely Justin came into being and there was no way I could leave this world without giving him his happy ending. So here we are, at the final stop on the journey, with both excitement and a few tears.

Justin’s character was my way of showing myself that every character can be his or her own hero. That we don’t have to be slaves to our circumstances, that given the right motivation and support from those who love us, we can move past our own negativity and become someone more.

Justin thought the person to help him was Grady.

That was because he hadn’t met Finn yet.

By helping Finn find his voice, Justin realizes that there’s more to life, more to himself, than he’d ever realized. I hope you’ll join me for Losing It, the final tale in the world of the Ringside Gym, where even the most unlikely of heroes can find his happily ever after. 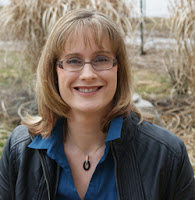 A romance novelist and short story writer, Christine d'Abo has over forty publications to her name. She loves to exercise and stops writing just long enough to keep her body in motion too. When she’s not pretending to be a ninja in her basement, she’s most likely spending time with her family and two dogs.

Giveaway
To celebrate the release of Losing It, one lucky winner will receive a $25 Riptide credit! Leave a comment with your contact info to enter the contest. Entries close at midnight, Eastern time, on February 24, 2018. Contest is NOT restricted to U.S. entries. Thanks for following the tour, and don’t forget to leave your contact info!