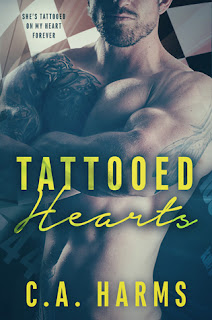 Sean Nichols, Jenny Preston, and Robby Whiteman were the best of friends, but Sean and Jenny share a special kind of closeness, one that transitions into a more romantic kind of love for both of them without either one confessing their feelings to the other. Then during the summer that Sean spends away from their hometown, Jenny and Robby cross a line that leaves Jenny pregnant and into a rushed marriage with Robby and Sean feeling betrayed and heartbroken. Leaving Irving, Texas is Sean's only option--even if it means being away from his parents--because keeping his distance from the only girl he's ever loved may be the one thing that saves his sanity.

Six years pass and Sean is a rising star in NASCAR who makes it a point to not return to his hometown even when he's in Texas. When his parents request for extra tickets to a race in Fort Worth, Sean doesn't expect the tickets end up with Jenny and her six-year-old son Landyn. Seeing her again hurts, and as much as she tries to apologize, the pain hasn't lessened while they've been apart. But then Sean learns about what life has been like for Jenny ever since she and Robby got married and had their son. The side of Sean that's always been protective of Jenny reawakens, but as much as he loves her and her son, can he get over his anger and hurt to be the man they need?

I do love me my second chance romances, and C.A. Harms gives readers a winner with Tattooed Hearts. There are a few issues with regards to the timeline--Landyn is six and a half, but it's been six years since Sean and Jenny have seen each other and Jenny had not given birth to Landyn at that time--which is the one reason why I had to pull back from giving the book five-plus stars, but other than that, I absolutely adored they're love story. There was such heartbreak between the two, with feelings of guilt, remorse, and anger lingering, even with their years apart. There was no way I could fault Sean for feeling the way he did, but I loved how Jenny really tried to make amends.

While the story certainly has fanciful parts to it, like Sean being financially capable of giving Jenny and Landyn the life and home Robby didn't and couldn't, the emotions simmering among the three members of this new but already firm family unit felt real and sincere. I loved how Sean was with Landyn and how he didn't look at this little boy as the constant reminder of the betrayal brought about by Jenny and Robby, instead seeing him as a child who deserved a better father, something Sean was more than able to be for him. I may have only read three of C.A. Harms's books, but as far as I'm concerned, Tattooed Hearts is her best one yet. I'm giving this five out of five stars. ♥