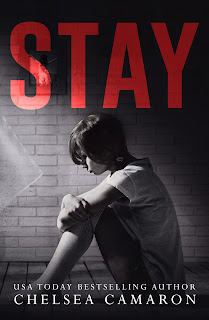 Stay is a standalone dark romance that shifted into varying shades of darkness from start to finish. Chelsea Camaron is an author who's probably most known for her motorcycle club (MC) books, though it was her co-authored Caldwell Brothers series that first introduced me to her writing, but this story with its ties to the mafia is probably her at her best, and I'm saying that even though I confess I wasn't a fan of how the story ended. I'm saying this because I want to stress that the rating I'm going to end up giving this book was me trying to strike a balance between my personal feelings with the direction the story went and Camaron's overall superb storytelling.

For most of the book, I was all in, totally absorbed by the story of Fallyn Valencia (I love that she shares the same surname as me) and Giancarlo Diamante. From the ten-year-old girl taken by the thirty-four-year-old masked man, to where they were eight years later, Fallyn and Giano's evolving relationship fascinated me. There's nothing clear-cut about them and what they let the world see and what remains just between them. You seriously need to go into the book without any set expectations, and admittedly, I effed that up near the end because that shocker of a twist seriously upset me. It wasn't a proverbial rug pulled out from under me; it was the whole damn foundation.

I expected--wanted--something different for these two and I didn't get it. I felt that they deserved a certain ending but sometimes, what the reader wants and what the author gives don't match. Even with the two epilogues--and yes, I read them both, hoping one would satisfy me over the other--I was left wanting. This wasn't because of Chelsea Camaron's writing, because I was seriously impressed with her ability to weave a story like this one. I would have given Stay a higher rating, but I had to be honest about how I felt when I was done reading. So, the overall story gets three stars and the writing five stars, so I'm averaging that to four stars, which is my final rating. ♥