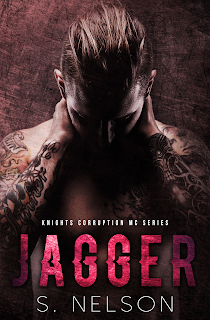 When I placed my lips on the side of her neck, I felt her pulse strumming underneath, and I couldn't help but smile. No hesitation; I knew she was finally ready to give her body over to me.

Jagger is the third novel in author S. Nelson's ongoing MC romance series, Knights Corruption MC, and it was one of my most anticipated reads for the year. I was originally supposed to read and review the ARC alongside the release blitz scheduled for it, but well, things fell through and unanswered emails later, I had no other choice but to wait until December--which is when I had more free time to read leisurely--to read and review this, making this the first book in the series I didn't review in time for the release date, which kills me because I like to keep things in order in my own weird way. Was the wait worth it though? It was agonizing on my end because I'm totally in love with the series (damn you, offline life!), but yes, it was so freaking worth the wait. Of course, I wish I'd read it sooner, but Jagger belongs in a special category of books which can be read at any darn time and remain timeless.

Jagger Blakeslee may "only" be a prospect but he's been earning his way towards becoming a patched member for a while now. He's bringing in money to the Knights Corruption motorcycle club with every win he's racked up as one of the top underground fighters around. He's always ready and willing to do whatever's necessary to not just get his patch but to win the respect of his president and brothers. Becoming a brother with the KC MC is what he's been working so hard for and he's never lost his focus...until he meets Kena Prescott. She's nothing like most of the other women he's spent time with. There's a light and innocence to her that draws him in. With her, he learns that actions truly speak louder than words. But can someone like Kena ever fall for a man as dark and damaged as Jagger? Will the choice have to come down to the club he considers his family and the woman that owns his heart?

Gah! I loved Jagger. While I usually love finding out about the real names of the brothers in the club, suffice it to say that I wasn't a fan of the name Harold, mainly because it didn't fit the man that Jagger had become. Throughout the series, he had a lot of things to learn, but there was no doubting his loyalty to the club, and even when he met Kena, his loyalty was unshakable, although clearly he was often torn between wanting to be with his girlfriend and keeping up with his responsibilities to the KC MC. I really liked the romance that Jagger and Kena had going, but I admit that it was the whole Knights Corruption versus Savage Reapers angle that had me at the edge of my seat because it felt as if things were coming to a head. See, this is why I love this series--I get my romance, suspense, action, and yes, sex, all in one well-written package. Jagger's my favorite KC read to date. Five-plus stars! ♥