Review: For All the Evers by Debra Anastasia 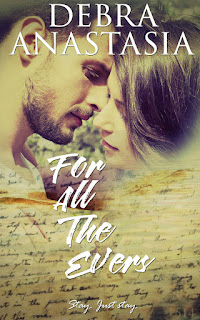 For All the Evers is, without a doubt, one of the most unique reads I've had the pleasure of reviewing this year. I've read three other Debra Anastasia stories before--Poughkeepsie, Late Night with Andres, and Shackled--and while I've enjoyed each one, this latest release from her is my favorite so far. This standalone romance has elements of the paranormal and suspense added to it and mixed altogether, it's created this one-of-a-kind story that had me curious and enthralled from start to finish. Fallen Billow and Thomas McHugh are soul mates...except they're from two divergent eras, living in two different centuries. That aspect alone guaranteed me picking up this book, but it was what lay between the covers that kept me going, wanting answers and hoping for an impossibly happy ending.

Dropping out of college was inevitable for Fallen Billow. Her younger brother needed her. Their alcoholic mother was nowhere to be found and if she did dare to make an appearance, it was to squeeze whatever money she could from her two children. Working at a hotel was the best Fallen could do, but at least it keeps her brother fed. She takes care of the fifth floor and has special instructions to make sure room 514 is maintained just like the rest of the rooms. Curiously, the room isn't open to guests, and the first time Fallen cleans it, she blacks out, only to find herself on a different plane, one where she meets Thomas McHugh, a soldier. The connection between them is instant, but can love truly exist between two people, one of whom was killed before the other was even born? Can Thomas and Fallen defeat time and death to find one another in the now in order to live and love for all the evers?

I've read stories where complications are piled on the main characters for the sake of simply making their journey to happily-ever-after longer and more difficult. In the case of Thomas and Fallen, they have one basic complication and it's one that prevails for most of the novel. It's more than enough because how the heck do you outrun time and outwit death? Yes, Lad Orbit is the antagonist, but defeating a human being is much simpler than trying to overcome things like established history. Thomas is already fighting one war and Fallen is trying to battle with her mother's addiction and abandonment, but what overtakes all that is their struggle to be together because they SHOULD be together. It's fate. This was such a beautiful story about the power of true love and how, if you really do believe, even the super impossible becomes possible. For All the Evers is Debra Anastasia at her best. Five stars. ♥

Purchase For All the Evers on Amazon.