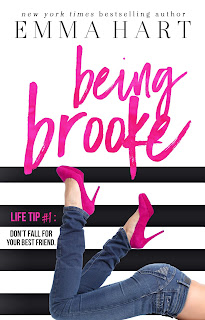 Brooke Barker and Cain Elliott have been best friends for a decade, and Brooke has been in love with her best friend for most of those years. Almost everyone around them knows how she feels. Cain, however, is as clueless as ever, and Brooke has no intention of cluing him in anytime soon. The last thing she wants is to lose his friendship, so she keeps her feelings to herself. Her feelings towards Cain's caustic girlfriend, however, are more difficult to keep a secret. So, Cain tries to balance his relationships with both women, hanging out with Brooke while pretending to be at his mom's and trying to be discreet when checking his phone whenever his girlfriend messages. Their other best friend thinks it's time Brooke come clean and think it's high time Cain break up with his girlfriend. But Brooke has accepted that Cain will "only" remain her best friend for the rest of their lives--like she's accepted that she's a disappointment to her parents and that she's yet to amount to much. That's life, right? But maybe, just maybe, things are about to change and maybe she sees there's nothing wrong with just being Brooke.

Being Brooke is a standalone romantic comedy from bestselling author Emma Hart, but I'm kinda, sorta, REALLY hoping that it's the start of a series or, at the very least, that it'll spawn a spin-off or companion novel, but I'll get to that later. This was an adorable best friends to lovers story that generated a lot of laughs on my end as well as a fair amount of "awww"s at the appropriate moments, aka when besties Brooke and Cain finally came to their senses. It would be easy to point out that had Brooke simply confessed her feelings early on, she could have spared herself a lot of heartache and Cain could have not wasted his time with his clingy girlfriend. Everyone else saw that Cain and Brooke were meant to be together, but yeah, clearly, no one informed these two about that epiphany. There's a lot of back and forth when it comes to Brooke and Cain moving past the friend zone, but I loved their banter and it was clear that they really did love and care about each other as friends. About what I mentioned earlier: I hope Carly and Zeke--Brooke and Cain's other best friend and Cain's older brother, respectively--get their own story since there was obviously something going on, at least on Zeke's end. I'm giving Being Brooke five stars! ♥