Review: All in Fear by Various Authors 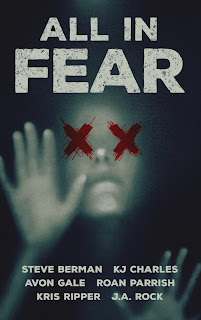 Note: This ARC was provided by Open Ink Press in exchange for an honest review.

It's been a good long while since I've been able to just kick back and find something that captures my full attention in a genre that I've missed reading: horror. I'm a fan of masters like Stephen King, Anne Rice, V.C. Andrews, Peter Straub, and John Ajvide Lindqvist, and while romance novels have taken up most of my attention over the past few years, I'm always on the lookout for a horror story that tickles my fancy. A sub-genre I've been rather obsessed over the past couple of years has been LGBTQIA romance--and when I say "obsessed", I'm actually downplaying my need for these books. Now, when you put together horror AND LGBTQIA, well, that's just like Christmas coming early, and when it isn't just one story but six of them, half of which were written by authors whose previous work I've loved and the other half by authors I'm now itching to read more from? It's like Santa saying I've been good this year and he's now rewarding me for my efforts. Or maybe he's rewarding me for being naughty... Either way, I'm grateful Open Ink Press--aka Santa--reached out to me and made me an offer--i.e. to read and review their upcoming LGBTQIA horror anthology release--I couldn't refuse. Thank goodness I didn't because All in Fear is, without a doubt, one of the best collections of short stories of any genre I've come across so far in recent memory.

Company was written by Roan Parrish and is the story of a teenager named Nick seeking companionship after he feels his childhood friendships have stagnated and withered away. His wish comes true in the form of Michel, a vampire from his favorite comics, but you know what they say about being careful with the wishes you make and Nick may have realized this too late. Palmer appears to have found true love in the form of his boyfriend of three years, Jon, in Kris Ripper's Love Me True. However, could this love match be too good--or too bad?--to be true? KJ Charles brings to life a tale that rings familiar but it may be too late when Johanna realizes exactly what Sawney Reynard is capable of and how things are far more complicated than they may seem in The Price of Meat. In the Steve Berman-penned His Mouth Will Taste of Chernobyl, pledging to a fraternity his father once belonged to is a must for Steve, but at what cost? And how does the Bailey flask play into it all? Legion: A Love Story by Avon Gale is a love story unlike any other, but love comes in different forms, even ones Jase doesn't immediately comprehend but isolated with Cain, curiosity can indeed breed intimacy. Last but not the least, J.A. Rock has Beauties and one in particular captures Lester's fascination, but Ira is keeping a secret and it's one that Lester could regret discovering.

All in Fear is an anthology composed of six different horror stories from established names when it comes to LGBTQIA fiction: Steve Berman, KJ Charles, Avon Gale, Roan Parrish, Kris Ripper, and J.A. Rock. Admittedly, I was familiar with five of the six authors and had only read published works by three of the five while having the books of the other two on my to-be-read list. One of my favorite things about anthologies is having several stories at my fingertips and getting to either read them in order or to pick and choose. Being the stickler that I am for order, I go in whichever order they are in the book, but each of the stories in this collection are standalones, so you can read one a day, all six in one go, or however you want to. They tackle different horror elements and some are longer than others, but what I will say is that each one stands on its own merits and they're all brought together by the common element of outstanding storytelling. From a demon to a serial killer, you have here a mix of the non-human to the human to the inhumane, and I for one gobbled it all up like the greedy reader I am, especially since I happen to be feeling rather starved for fantastical horror fiction as of late. With All in Fear, I didn't get just one thrilling tale to sink my teeth into but a set of six to titillate my consciousness and play on my fears. Five-plus stars. ♥