Review: Turning Up the Heat by Kara Kendrick (Peachtree Grove #2) 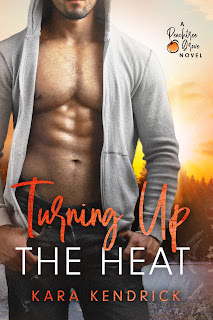 Note: An advance reader copy (ARC) was provided by the author via Foreword PR & Marketing.
We're back in the small town of Peachtree Grove for the second book in Kara Kendrick's series by the same name. Turning Up the Heat is Delaney Miller and Quinn McCauliffe's story, Delaney being a pastry chef and owner of the newly opened bakery called Lanie's, and Quinn being a firefighter with Station 54. When Quinn loses a bet to Delaney, he doesn't quite expect to end up in bed with her AND help her out prepping and baking the next day. He's made it his mission to not act on his attraction Delaney due to one simple thing: she just happens to be his best friend's younger sister. Now that he knows what it's like to be with her intimately, there's no way that one time can be enough. But will these two go up in flames when the heat gets too hot?
This was an entertaining falling-for-your-best-friend's-sibling romance, and everything pretty much plays out the way I expected it to. There was some definite chemistry going on between the main characters, Delaney and Quinn, and it was a fairly lighthearted read with a miniscule amount of angst due to career prospects. There also wasn't a whole lot of drawn-out drama with regards to how Josh, Delaney's oldest brother and Quinn's best friend, was going to react to his sister and best friend being together. All in all, Turning Up the Heat was a four-starred, enjoyable small-town romance with a well-earned happy ending.
-------------------------
Read my reviews for the Peachtree Grove series: