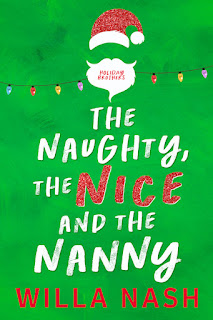 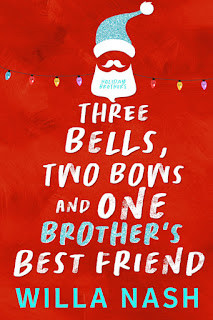 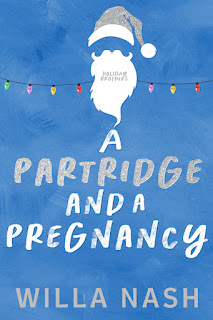 Note: Advance reader copies (ARCs) were provided by the author.
Willa Nash delivers holiday feels times three with the release of her Holiday Brothers series. Yes, you read that right--all three books have been released into the wild! Each one is novella in length, so if you're looking for lighthearted, fun-filled reads to help you get into the holiday spirit, look no further than The Naught, the Nice, and the Nanny, Three Bells, Two Bows, and One Brother's Best Friend, and A Partridge and a Pregnancy! These are all standalones, but I highly encourage you to read them in order for a more fab Holiday (Brothers) experience. I read all three in a single sitting because how could I not? The series as a whole receives 4.5 stars.
The Naughty, the Nice, and the Nanny is a single-parent-and-nanny romance. Natalie Buchanan is called in to help out single dad Maddox Holiday for a week with his daughter, Violet, who's garnered a reputation for being a wee bit difficult. I loved the dynamic between these characters. Nat was like a combo of Mary Poppins and Nanny McPhee with some sass thrown in. I adored Maddox, who came to realizations regarding priorities and maintaining a balanced life. Violet may have been a tad spoiled, what with Maddox overcompensating for the girl's mother, but I understood her "bad" behavior. This first Holiday Brothers novella gets five stars.
Three Bells, Two Bows, and One Brother's Best Friend is a falling-for-your-sibling's-best-friend romance. Stella Marten is thrilled to now be working at Holiday Homes, but she is a bit nervous over the fact that she'll be working alongside Heath Holiday, her longtime crush AND her brother's best friend. Stella and Heath were absolutely adorable together! While I wasn't thrilled with Heath asking her to keep their relationship a secret, I empathized with their need to find the right time to tell Guy, Stella's brother, and the rest of their respective families. There was a lot to love about these two and their story, which is why this earns 4.5 stars.
A Partridge and a Pregnancy is a surprise pregnancy romance. Eva Williams is all set to fly to London to begin overseeing a project there when she discovers she's pregnant with Tobias Holiday's baby. The two of them have history, one that involves quite a bit of heartbreak, and hooking up that last time was supposed to be about saying goodbye. With a baby on the way, it takes a while for them to figure out what changes, if any, they'll be making. It took some time for me to warm up to both Eva and Tobias, although more the former than the latter. I did like how everything was resolved and the epilogue was a total winner. Four stars for this!
Release Date: 04 November 2021
Dates Read: 01-03 November 2021
Learn more about Willa Nash.
Purchase the Holiday Brothers series on Amazon.