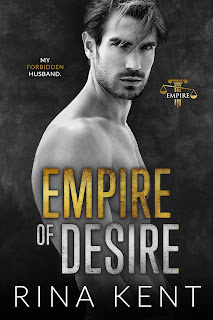 Note: An advance reader copy (ARC) was provided by the author via Wildfire Marketing Solutions.
My last read from Rina Kent was her Lies and Truth duet in 2020; this also served as my introduction to the author's writing. Her latest release, Empire of Desire, is the first in her new Empire series, and based on what I've read on Goodreads, it appears to be a spin-off of sorts of a previous duet, Thorns. Not having read the aforementioned duet, I was still able to comprehend what was happening in this new series starter without feeling as if I was missing anything. In short, just dive in even if you've yet to read Kent's other books.
Empire of Desire is an age-gap romance featuring a twenty-year-old named Gwyneth Shaw and her father's best friend, thirty-eight-year-old Nathaniel Weaver. Gwen has been nursing a crush on Nate since she was fifteen, finally gathering enough courage to steal a kiss when she turned eighteen. For two years, Nate keeps his distance from her, but when his best friend's legacy is at risk, he does the one thing he believes is best to ensure Gwen is protected--he marries her. Now, the forbidden is unavoidable temptation within reach.
I'm a wee bit on the fence about this book. I love a well-written age gap romance, and as long as the younger main character is at or past the age of consent, I have no issue with however many years may be between the main characters. There was just a lack of build-up when it came to Gwen and Nate's relationship, and these two didn't click as much as I'd hoped they would. The book seemed promising, but while it did deliver on some things, it didn't deliver on others, leaving me wanting. Three stars go to Empire of Desire.
Date Read: 05 November 2021
Learn more about Rina Kent.
Purchase Empire of Desire on Amazon.