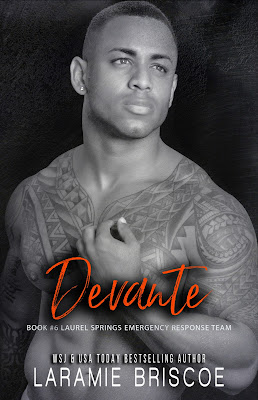 About Devante
From USA Today and Wall Street Journal bestselling author Laramie Briscoe comes the next book in the Laurel Springs Emergency Response series.
Sometimes home finds us when we aren’t looking…
Devante Soles
Laurel Springs was nothing more than a dot on the map when I decided I needed a change from the fast pace of Atlanta.
I’m more surprised than anyone else when I look around one day and realize I have friends who have become family, a city that’s become a home, and a girl who's decided to make me believe in love.
Unlike me though, her past has followed her here.
A community that I once never thought I’d have, comes together with me to save her.
Eden Murphy
Chicago wasn’t for me. The bright lights, the embezzlement I should know nothing about, and the made man who changed everything—it all contributed to me leaving. I never felt safe there. Little Laurel Springs though? It’s everything I hoped it would be and more.
My coffee shop, A Whole Latte Love, isn’t doing well, but I’m close to turning a profit.
And Devante? Well he’s more than I ever could have asked for.
But Mario? He’s the one I didn’t count on coming back and demanding what I took… 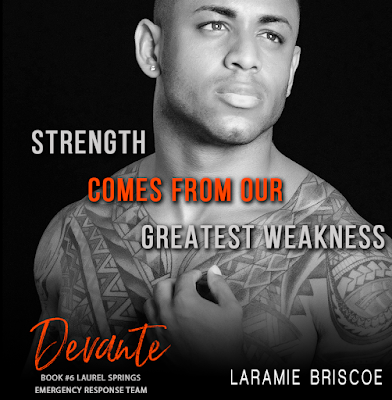 Read my four-starred review of Devante.
Add Devante on Goodreads. 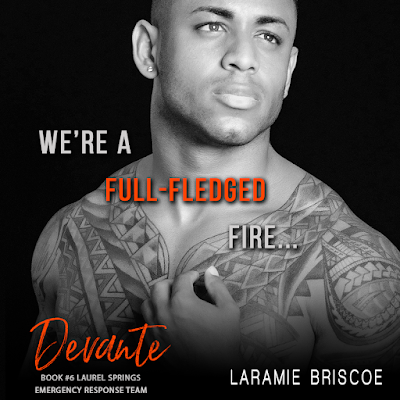 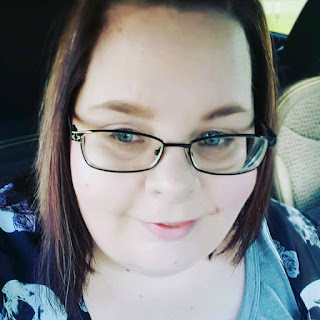 Laramie Briscoe is the bestselling author of the Heaven Hill series and the Rockin' Country series.

Since self-publishing her first book in May of 2013, Laramie Briscoe has published over 10 books. She's appeared on the Top 100 Bestselling E-books Lists on iBooks, Amazon Kindle, Kobo, and Barnes & Noble. She's been called "a very young Maya Banks" (Amazon reviewer) and her books have been accused of being "sexy, family-oriented, romances with heart".

When she's not writing alpha males who seriously love their women, she loves spending time with friends, reading, and marathoning shows on her DVR. Married to her high school sweetheart, Laramie lives in Bowling Green, KY with her husband (the Travel Coordinator) and a sometimes crazy cat named Beau.