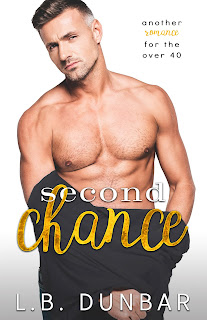 L.B. Dunbar's Sexy Silver Foxes is one of those series that gets better with each new release. I had my quibbles with the first three--I also have a couple with this fourth and latest one--but they've become fewer as I've gone from the series starter to the follow-up to the third, and now this newest one. I also happen to be an advocate for romances that have older characters in them, not just because I happen to be in my forties but also because romance and finding true love, whether it be for the first time or once again, shouldn't be limited to teenagers and those and their twenties and thirties. Dunbar has filled that void rather nicely, and she's made it easy to fall for these stories.

Second Chance is the story of forty-five-year-olds Matilda Harrington Rathstone and Denton Chance, two-thirds of a triumvirate of best friends that included Christopher Rathstone, who also happens to be Mati's late husband. All three were thick as thieves growing up and then things changed when they were teenagers and far less platonic feelings came into play. When Denton broke his promise to Mati but kept the one he made to Chris, that close-knit friendship the three shared was forever shattered. Twenty-seven years later--and a year after Chris's passing--Mati finds a letter from Chris and Denton gets a call from his big sister. Things in East Ridge are about to get interesting.

There's quite a bit of angst in this love story, a lot of it borne out of all the secrets and lies that have lingered throughout the years, and I'm not just talking about between Mati and Denton either. I liked Mati and her independence. This woman didn't need a man to validate her existence. It took a bit for me to warm up to Denton, although I didn't think he was a bad guy at all. There was a whole lot of two-steps-forward, one-step-back going on with them, and I found a wee bit frustrated at times at their reticence, but I did like the history that existed between them and how they overcame majority of their demons and hurdles. I'm giving Second Chance 4.5 stars. ♥