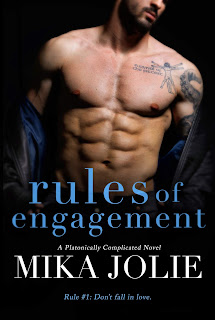 Rules of Engagement is the second novel and the third release in Mika Jolie's Platonically Complicated series. This friends-to-lovers romance can be read independently of the first novel and its accompanying novella--The Boy Friend and Explicitly Yours, respectively--but those were good reads, so you may want to give them a whirl and read the books in order to avoid any potential spoilers. Aside from the aforementioned friends-to-lovers trope, this story also takes on the fake relationship/engagement/marriage theme, which I'm not a huge fan of, but combined with Jolie's writing, a great cast of characters headlined by highly likable main characters, and my favorite friends-to-lovers trope and the whole fake relationship didn't feel as eye-rollingly tedious as many of the others one I have read.

When seven-year-old Katharine Grace Morello chased after and tried to tackle ten-year-old Lucas Manuel Bernal, accusing him of stealing her older brother Dean's bike, it was the beginning of decades-long friendship for Lucas with the brother-sister duo. Twenty-one years later and Lucas and Kate remain the closest of friends, but there's been a quiet shift of sorts between them. But as much subtle flirting as these two engage in, Lucas is very much aware that he can't cross that line; not only is Kate one of his dearest friends but she also happens to be his best friend's sister. When Lucas's ex-wife, however, threatens to file for sole custody of their six-year-old daughter, Kate offers up her help--by pretending to be his fiancé, thereby making him look more like a man who still believes in commitment than a playboy. They set their rules and it shouldn't be too difficult to follow them for a few days. But rules are meant to be broken, right?

This was a really good read, one that limited the angst to just enough to satisfy the angst addict and me and coming from a side character who really was an honest-to-goodness troublemaker slash drama queen. Lucas (who gets bonus points because his middle name is the same as my father's first name) and Kate were two people who had a solid friendship, and while there were more than platonic feelings going on, I was glad there wasn't all this pining and whining going on. These were two mature adults who knew what they wanted and while they did need to work on being more upfront about the steps they wished to take--and work on their communication as well--there was an ease to their transition from friends to lovers to even more that never felt forced to me. I also liked Mika Jolie's easygoing writing style and her coming up with these friends-to-lovers stories. I'm guessing that Cameron Daniels will be up next and I've got my fingers crossed that his book will be just as good as the first ones. Rules of Engagement garners 4.5 stars. ♥

Purchase Rules of Engagement on Amazon.