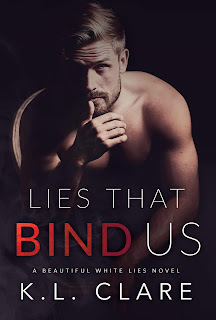 
“You were never lost, Ell. I knew where you were all along. I've been waiting for you.”

Let me get this part of the way (although I'm pretty sure I'm going to end up mentioning it again later in this review): BUY THIS BOOK ASAP! Okay, now on to my review. Originally released by the author under the name of Kelli Clare and with the title Hidden, Lies That Bind Us isn't the first debut release that's captured my attention, but it's one of the very rarefied few that I've become rather obsessed with, fretting with anticipation for the next book in the series to be released while wondering why this author hasn't released anything before, given that K.L. Clare clearly has a gift.

There's a constant thrum of anticipation and intensity throughout the novel, at times highly palpable and other times quiet but ever-present. Will Hastings and Ellie James share the kind of connection that real people would envy and other fictional couples should have--a devotion to each other unlike any other and a love and loyalty beyond all convention and expectation. Even the supporting cast of characters, whether villians or not, demand the reader's attention. The story itself is unique, a true spark of creative genius on the author's part, and the fact that this is just the beginning of a new series has me eager to see where Clare takes us next.

Purchase Lies That Bind Us on Amazon.