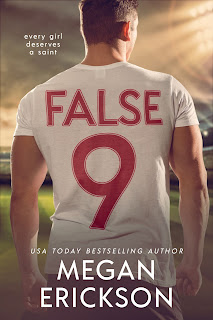 False 9 is the surprise release from bestselling author Megan Erickson, and while it does feel like the first in a new sports romance series, it is a standalone. Readers are introduced to twenty-year-old Lavin Saint, midfielder turned false 9 for the Badgers, the football (soccer) team for Travers University. He's a junior in college, shares a home with three of his teammates slash closest friends, and oh yeah, he's a virgin. He may be good on the pitch, but when it comes to girls, he doesn't have the same winning moves, ending up in the friend zone time and again. And then Bianca Santos shows up in one of his classes. She's twenty-one and the gorgeous transfer student seems to have focused her attention and affection on Lavin. The problem is that she happens to be his coach's niece and it becomes increasingly clear that she's keeping a secret. But being around Bianca has him pushing his boundaries, taking chances where he would usually play it safe. She makes him want to quit being supposedly saintly and do sinful things to and with her. Bianca Santos could be Lavin Saint's biggest distraction...or maybe his one inspiration.

Okay, I just re-read that last sentence in my previous paragraph, and it may have been a wee bit cheesy, but hey, sometimes cheesy is good. This new adult romance, though, wasn't too cheesy, and it had a truly awesome male main character in Lavin Saint. He was awkward but adorably so, and he had such a good heart and humble spirit. He loved his two dads--who were absolutely fab--and loyal to his core group of friends and played his heart out with and for his team. There was simply no resisting the guy! Bianca was pretty good as well. She was a risk-taker who had an air of vulnerability to her, and when her secret is revealed, it becomes clear why she was the way she was. My one quibble would have to be her being Filipino yet there was nothing distinctly Filipino about her. She could have had Western ethnicity but had a name that could've been Filipino but could also have been Hispanic or Latin. I did like the hint of suspense in the latter half of the book as well as the humor, and I certainly hope Dre, Shane, and Zac will be getting their own stories in the future, but Lavin's set the bar high. False 9 garners four stars. ♥