Review: The Executive by K.I. Lynn 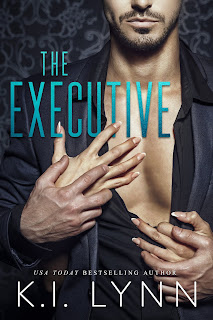 No one quite does office romance like K.I. Lynn does--although this author doesn't limit herself with just this particular trope--and her latest standalone release is every bit the intense read that I've come to expect from her. The Executive is story about revenge and redemption and centers on thirty-six-year-old Lincoln Devereux, chief executive officer for DCS, and twenty-seven-year-old Ivy Prescot, his newly acquired assistant. When Ivy applies for the position as Lincoln's assistant, she had no idea just how demanding of a boss he would turn out to be--even though he did give her fair warning. She goes above and beyond his expectations, but what she doesn't know is that Lincoln has very special plans for her--plans that involve using her and her knowledge of her former boss and the man's company in order to destroy him. Ivy is supposed to be nothing more than collateral damage, but Lincoln had never taken into consideration having actual feelings for his beautiful and intelligent assistant. He tells her that she's the queen to his king, but what will she does once she learns that she's been his pawn all this time?

Sexual tension? Check. Bites of humor? Check. Angst? Check. Sex and romance and lots of it? Checkity-check-check! Goodness but how I enjoyed Lincoln and Ivy's story, but if I were pressed about what was the one thing I loved most about this book, it would have to be the kind of woman Ivy was. This was someone who knew what she wanted and went after it, knowing full well what she was capable and whatever it was that she wasn't adept at, she'd work on it relentlessly. She wasn't some simpering shy violet waiting for some man to sweep her off her feet and rescue her. Nope, she was independent and she gave as good as she took, but she also knew how to love and forgive. The motivation for Lincoln wanting revenge was one that would have gotten a thumbs-up from me because I would have probably demanded justice and vengeance as well. That being said, you could already see there was heartbreak on the horizon for these two BUT all's well that ends well. However, you will have to read the awesomeness that is The Executive if you want to know more. I'm giving K.I. Lynn's newest fabulous read five stars. ♥

Purchase The Executive on Amazon.