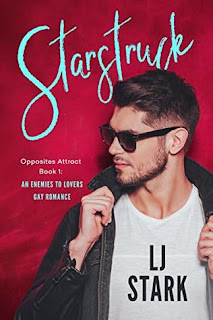 As a reviewer, you kind of know what to expect going into an advanced reader copy (ARC). More often than not, there will be editing issues, and I always appreciate it when there's text that's included stating as such. So, there's some amount of leeway that I give ARCs, and when it happens to be written by a self-published debut author? Then the margin of error increases. Here's the thing though: when the errors become so distracting that they detract from the reading experience, like it or not, they're going to affect my review. It doesn't help that I do edit manuscripts, essays, articles, and so on, so yeah, I do notice the editing issues but try to focus on things like story and character development, story flow, etc. Alas, there were just too many errors in this one, but first things first...

LJ Stark is a debut author and Starstruck is Stark's Opposites Attract series starter. Aiden Hunt is an actor who's already made his mark in the industry while Peter Czerny is an up-and-comer. They don't seem to have a whole lot in common, and it's pretty clear from the get-go that there isn't a whole lot of love lost between the two. All it takes is one wrap party and more alcohol than would be recommended in order to make sane choices for Aiden and Peter to embark upon what can only be described as an insane situation. With rings on their fingers, the two awaken to find themselves married, and while a quickie divorce seems like the next logical step, they stay married. This is nothing more than an arrangement out of convenience, but there's nothing convenient about falling in love.

Okay, let's start with the positive: the author shows promise. What she has here is a pretty good enemies-to-lovers romance along with some great snippets of conversation between the main characters. No, the story isn't groundbreaking nor is it anything I haven't read before, but I appreciated the effort Stark put into it. Now, time to tackle the not-so-positive stuff: I get it. This is an ARC, but it felt more like a draft that hadn't gone through any round of editing or proofreading at all. That aside, there was no avoiding the deluge of errors, and they did take away from the story and my overall reading experience. Hopefully, with some heavy duty editing and tweaking, Starstruck could become a better version of itself. For now, however, I'm going to have to give this one three stars. ♥