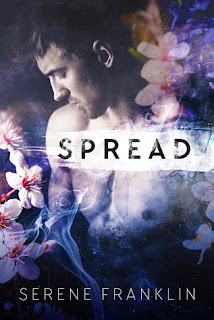 Serene Franklin's debut novel was notably ambitious and left me with the impression of the author's promise. Spread is the story of thirty-one-year-old Theodore Rey, a man who spends most of his waking hours working in the same company as his father in Chicago. However, it's in his dreams that Theo is haunted by memories of his best friend Isaac Jones. For years, he hid his sexuality, and now, a part of his already limited spare time is spent hooking up with anonymous men, trying to rub a very temporary salve on his all too deep wounds. When he meets twenty-four-year-old Montreal native Masamune Kuroki, it's clear from the moment they exchange their first few words that this wasn't going to be like any of Theo's past sexual encounters. Masa is his opposite, the light to his dark, and he opens Theo's eyes--and heart--to possibilities that Theo never even considered for himself. But for someone who's always tried to be careful and in control, there are a lot of unknowns when it comes to being with Masa. But maybe the unknown is exactly what Theo needs. Maybe he'll finally realize he deserves a happy ending.

I know it's been mentioned in other reviews, but this was a highly detailed story. In short, there was a lot of stuff being described, and while that's all well in good in order to give the reader a better idea and visual about what's going on, it can become rather cumbersome when a book is overly detailed, taking away from the overall reading experience. However, I did appreciate the story that Serene Franklin put together. Theo is a complicated man who is drowning in his feelings of loss and guilt. The layers are slowly pulled away, and the more we get to know Theo, the clearer the whole picture of him becomes. It's Masa who provides him with a proverbial safe place to fall, and he's the yin to Theo's yang or vice-versa. We get glimpses of Isaac, Theo's best friend, through flashbacks that are told in Theo's first-person perspective, and he's a notable supporting character, as is Jamie, aka Jay, Theo's younger brother. There's a lot to like about this debut release, and I look forward to seeing what story Serene Franklin will be sharing with her readers in the future. Angsty and interesting, Spread turned out to be a good four-starred read. ♥