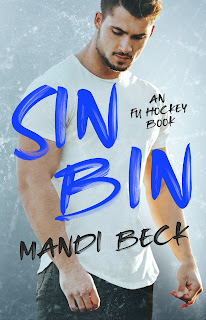 I originally read Sin Bin when it was a short story included in the multi-authored Team Player sports romance anthology, which was released in December of last year. That being said, I did enjoy re-reading the story in this new edition of the book, which now includes more material. This also officially kicks off Mandi Beck's FU Hockey series, FU being Fulton University, the alma matter of the male main character who is a professional hockey player, and the school where the female main character is a senior with a sports scholarship thanks to her prowess atop the softball pitching mound. Add to it a bit of a taboo element courtesy of the ten-year age difference between them.

Thirty-year-old Jason Dagger is back at Fulton University to check out one of the college players his team is eyeing before he graduates and enters the NFL draft. He's used to women knowing who he is and not being able to resist his good looks and undeniable charm. Who would have thought that twenty-year-old Stella Cruz had no idea the guy in front of her was a member of this season's Stanley Cup-winning team? But the connection between them is palpable, and in the four days that Jason is in town, there isn't a day they aren't together. Fast forward six months later and Jason is back in Boston from Chicago, but Stella's icy and wary reception makes it clear he isn't welcome.

I've been trying to remember what my feelings were towards Jason when I first this as a short story, but my review for this was condensed because there were other stories that were also part of my review for the anthology. Let's just say that I wasn't much of a fan of Jason's for a number of chapters. I didn't hate him, but the guy did not treat Stella well when she went to see him. However, he did make up for his jerk-like ways, and then there's Stella who I think was quite awesome, thanks to her fierce independence and sense of integrity. She took a stood when needed but didn't overdo it or became a drama queen. Sin Bin was a four-star series starter, and I can't wait for book two! ♥