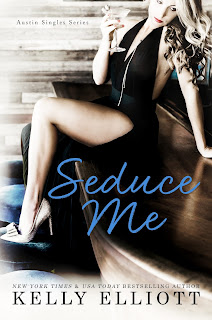 Well, well, well... Kelly Elliott has thrown down the gauntlet and if her first foray into her new series is a mark of things to come, her Austin Singles series could turn out to be the best one yet. Of course, it's too early to tell, and I can only imagine the sort of pressure that statement would put on any author, but come on! Seduce Me was everything I did NOT expect it to be and that in itself earns this series starter loads of bonus points. With a biting brand of humor--my favorite!--and a second-chance romance trope, this novel had and held my devoted attention.

The untimely passing of her parents has positioned Charleston Monroe to take over as the CEO of CMI Consulting, the company that her grandfather founded and her father helped to flourish, at twenty-eight. She knew going in that becoming the CEO at her age and being a woman could make things more difficult no matter how much her father prepared her, but learning that there was a caveat set by her late grandfather has her in shock. She needs to be married within a short period of time to a man with a business degree. She's already got a guy in mind, but convincing Tucker Middleton--the boy whose heart she broke a decade ago--to agree won't be easy. This plan calls for some major flirting and seduction, but Tucker knows all about the game Charlie's playing and he intends to win.

I loved how this had a completely different feel compared to the author's Cowboys & Angels books--which I'm a fan of--because it shows me that she can also write stories with more levity than I'm used to from her. There's still some angst present, but this does have a lighter overall feel to it. I was a tad iffy when it came to Charlie in the first few chapters--a lot of that had to do with how she handled being with Tucker ten years prior--but she did manage to win me over with her spunk and tenacity. Then there's Tucker who had a good heart but who was also wary when it came to the only girl he's ever truly loved. This had major second-chance romance feels that I loved, and thank goodness Kelly Elliott made them work for their happy ending. We're also introduced to the rest of the circle of friends that both Charlie and Tucker belong to, and I'm definitely looking forward to the books that'll follow this series starter. Seduce Me has set the bar high; all ten fingers crossed Austin Singles continues to impress. Five stars. ♥