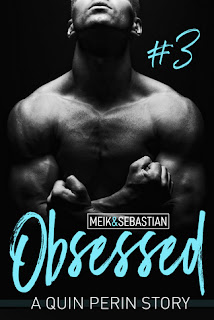 I find myself becoming weirdly obsessed--pun intended!--to Quin and Perin's Obsessed series featuring main characters Meik and Sebastian. I was feeling iffy in the beginning, not being a fan of Meik's AT ALL, and while I'm still iffy, it has more to do with my not liking Meik's treatment of Sebastian rather the writing or the story. Three installments in, and Sebastian has left Meik after the latter basically leaves him no other choice, having pushed him away after getting too close for comfort. Going their separate ways would have probably been best, but when Meik's assistant uncovers information regarding Sebastian's past, Meik's anger gets the better of him and he goes off to search for the younger man. What he finds has his anger going up a notch. No one can lay claim over Sebastian, but while what he's offering will do for now, what happens when Sebastian begins to want even more?

Yep, still not liking Meik all that much, but I do have a better appreciation for him because we're getting to know about how he was when he was younger, and it's clear that he was a young man who knew how to love and what it was like to have someone love him back. That doesn't mean, however, that I didn't want to smack him upside the head for some of the stuff he said and did to Sebastian, but then this is the third book in the serial, so I've come to expect this sort of behavior from Meik. As always, this does end in a cliffhanger, and I have certain hopes with how Sebastian and Meik will handle what happened. Words were said and now it's out there, and I'm half afraid that these two are going to end getting their hearts totally broken or totally soaring, depending on how they react. Sigh. See? Weirdly obsessed, I tell you. Now the wait begins for book four. Speaking of four, four stars for Obsessed #3! ♥

Read my reviews for the Obsessed: Meik & Sebastian series: