Review: My One Despair by Claudia Burgoa 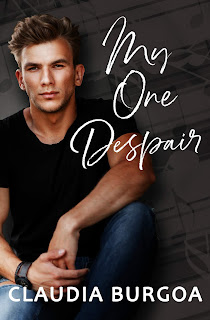 Claudia Burgoa has earned a reputation for writing angsty romances, and having read nearly all--save for two or three--of her novels, I can confidently say that it's a reputation that's been well-earned. The angst in her stories isn't merely there for the sake of drama or in the hopes of wringing out more tears from readers. What her main characters go through is far from easy, and oftentimes, it takes a whole lot of trial and error before they get it right.
Take for example Burgoa's latest release; My One Despair--which is a spin-off standalone of her previous full-length release, My One Regret--is a love story told in two parts: from the meet-cute at a bar between twenty-year-old college student Contessa Eloise Hades (aka Tess) and twenty-seven-year-old bartender, music teacher, and aspiring musician Gage Alexander Rodin to their shocking split two years later, and then fast forward six heartrending years before they allow themselves to be in each other's orbits again. True love, heartbreak, family, and music--Burgoa brings all these together and adds her storytelling  to give readers a second chance romance totally worth reading.

Tess was originally introduced in My One Regret, which you do not necessarily have to read in order to enjoy My One Despair, but I'm highly recommending that you do read it for two simple reasons: first, Tess's dad and stepmom are peripheral characters in her own love story so learning their story and how Tess herself plays a role in what happens to their relationship will allow you to better understand Tess and the Hades family, and second, it's a REALLY great second chance romance and one of my favorite reads so far this year. She's done a lot of growing up and I loved reading about how she truly comes into her own here and finds the kind of love her dad and stepmom share. Gage was someone who brought out the best in her, but there is a reason why their relationship ends the first time around, and while I won't go into the "why"--which is part of the twist in the story, one that I saw coming but I still wanted to see play out--I will say that I wanted to smack him a time or two, but his heart was in the right place, even if it did lead to it breaking. Overall, My One Despair was a well-written, five-starred story that I adored. ♥

Purchase My One Despair on Amazon.