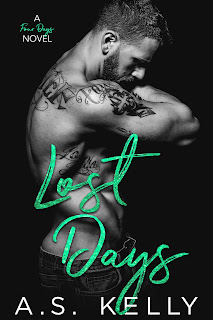 Note: An advanced reader copy was provided by the author via The Next Step PR.

Lost Days is the fourth and final novel in the Four Days series by author A.S. Kelly. This falling-for-your-best-friend's-sibling romance had all the angst that I've come to expect from this collection of books about four former band members who try to move forward with their lives after the death of the friend and the band's lead singer. They've opened a bar, but still they struggled with truly moving on. Slowly but surely three of the friends have found love and are living their happily-ever-afters with the women they're now sharing their lives with. All that's left is Aaron O'Donovan, and it seems like too many years of trying to be the responsible one--the one everyone else relied on--have caught up with him. He doesn't believe in love or happy endings, even though those closest to him appear to be basking in all that nonsense. Which is why he thinks it's best that he not act on his attraction to Ciara Doyle, his friend's younger sister. Add to that the fact that she's twelve years his junior at twenty-two and that he swore to her brother he'd never go after her. Ciara deserves someone who can give her the kind of happy family and home life that she deserves, but the more time he's around her, the more difficult it becomes to resist his feelings. When something unexpectedly terrible happens, will it be too late for Aaron to prove to Ciara that they belong together?

A.S. Kelly was a new-to-me author prior to me reading this series of hers, although I did do a bit of snooping around Goodreads and noticed that her work has received a lot of positive reviews. Originally written in Italian, the text has been translated by Kathleen Fitzgerald, and this is where I had a bit of an issue. I have no idea how the book reads in the author's native language, but in its English form, there are moments where the text in general feels choppy and stilted and when it came to certain conversations, the characters ended up sounding wooden and overly formal rather than casual. In terms of the story itself, this was a very angsty read and Aaron was a main character who had issues that he had yet to deal with. He was both stoic and stubborn, and while I understood his reasons for avoiding becoming involved with Ciara beyond friendship, he also did the whole back and forth thing repeatedly, making it difficult to continue empathizing with him because of his treatment of Ciara which bordered on playing around with her feelings, even if that may not have been his intention. As heavy as the story is, it DOES end happily and there was one particular touch that was sweet and sentimental and I think it served as a full circle moment for the guys. 3.5 stars for Lost Days; I'm curious to see if the author will translate her earlier work as well. ♥