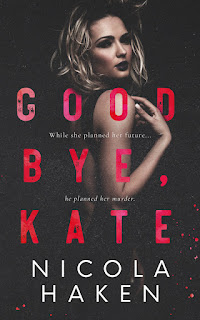 I've read three standalone novels penned by Nicola Haken--Broken, Counting Daisies, and Who We Are--all three M/M romances and all three receiving glowing reviews from me, and I'm not alone when it comes to the book love for the three aforementioned books. So, when the opportunity to read and review her latest release came along, all it took was for me to see the author's name and voila! I signed up. It was only afterwards that it dawned on me that Goodbye, Kate wasn't an M/M story. I know--slow on the pick-up and all. Now, I'm an equal opportunity romance reader, so this being an M/F read didn't turn me off. I was just surprised, but I also had high hopes because while there's that mix of excitement and apprehension to see how an author does when they venture into uncharted territory. Of course, this isn't Haken's first M/F book. A bit of digging on Goodreads shows she's released a number of those in the past. So, in terms of the M/F part, this was new to me, but not to her; what was new, at least as far as I could tell, was the sub-genre: romantic suspense. And well, Haken managed to surprise me again...

Goodbye, Kate is the story of twenty-four-year-old Kathryn Fletcher, better known as Kate. She's blissfully unaware of the harsh realities of her family background. She's been busy living her life as she knows and now she's happily engaged to the man she loves--twenty-eight-year-old Simon Kendall. Only Simon isn't Simon; He's actually Lincoln Hollis--or is he?--and he's been tasked to do one thing: kill Kate. The reason is plausible enough, but can murder truly be something that's justified? Kate is an innocent in the whole affair, and it's that innocence that may ultimately cost her her life. Lincoln preyed upon her naivete and pretending to fall in love with her was nothing more than a means to an end...or was it? Could everything between them been nothing but a rouse? Something for him to get close enough to her to gain the revenge the couple who became his pseudo parents have been desperately looking for? Kate no longer knows who it is she can trust. She's been betrayed by the men she once thought she could trust with her life, but can she entrust that--and her heart--once again to a stranger she loves?

I was absolutely committed to this book and fully invested in Kate/Sophia and Simon/Lincoln's love story. There's a lot of action and suspense interspersed with the romance and sex, and it made for such an entertaining read. Nicola Haken definitely kept me on my toes, and there were countless moments wherein I wondered if there was actually anyone among the core cast of characters who was trustworthy. Were they all pretending to be people they weren't? Yes, that included Kate because I'm paranoid and tend to overthink things, so I may have suspected her for a short blip in time. When we meet them, they're madly in love and ready for a future together, but for most of the story, we learn of their past as they try to remain steps ahead of their present circumstances. Do they have a future with all the bits of truths and lies surrounding them? Well, that's a question you'll get the answer to when you go and pick up this book. I'm highly recommending that you read it without any distractions that may pop out. You'll want to give this one your full attention. Goodbye, Kate is a 2018 favorite of mine and gets five stars. ♥