Review: Beneath His Stars by Amie Knight (Stars #1) 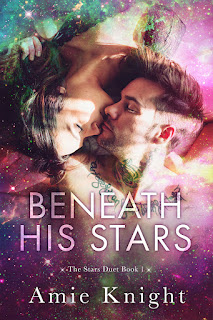 A star was realized.

A dream was born.

But even stars and dreams die.

And God, my heart ached because of it.

Young adult (YA) stories hold a special place in my heart, but I also tend to be extra picky when it comes to choosing which ones land in my e-reader. They don't necessarily have to be romances--but I'm also a firm believer that having a bit of romance in a story is always a good thing when executed well--but I do need to be able to relate to the story they're trying to tell. After all, I am in my early forties, and it's been a good, long while since I was in the actual age group of this genre's target audience. But the best kinds of stories--those that stay with you long after you've turned your e-reader off or placed your paperback back on your bookshelf--transcend stuff like demographics and the like, and Amie Knight's opening salvo in her much anticipated Stars duology is exactly that.

Beneath His Stars is the story of sixteen-year-old Livingston Montgomery and nineteen-year-old Adam Nova. On the outside, Liv looks like a girl who has it all...except looks can be deceiving. Still mourning the loss of her beloved father and having lost her mother years before, Liv is feeling very lost and very alone. Her stepmother may have guardianship over her but Liv is treated more like a nuisance than an actual stepdaughter, and her stepbrother seems like he has more nefarious intentions than should be considered acceptable between two step-siblings. Instead, Liv finds solace underneath the blanket of stars she's always loved...and it's there she finds Adam. He was the boy from the wrong side of the tracks, but he made her feel as if all was right in their world whenever they were together...that is, until evil forces beyond their control conspire to put an end to the star-crossed lovers' story.

Yes, this ends in a cliffhanger, and yes, it's the kind that may very well make you want to hurl your e-reader at something because gah! That ending killed me AND it made me want to kill a supporting character or two. Liv and Adam may not have been the sort of couple that made sense at the onset, but these two...they just owned my heart from the minute they met, and I was absolutely invested in their story. There was such a feeling of hope simmering between them until it was snuffed out and everything was just so damn heartrending. If you're a crier, you may need tissues. Amie Knight, you broke my heart with Beneath His Stars, but it still receives five-plus stars. ♥

Purchase Beneath His Stars on Amazon.