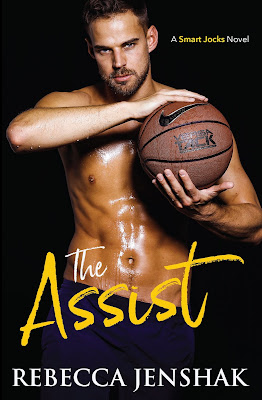 About The Assist
You know those stories where the smart girl tutors the dumb jock? This isn’t it.

Blair
What’s the probability of insulting the one guy on campus I need to help me pass statistics? If I knew, I wouldn’t be standing in front of Wes Reynolds begging him to tutor me.

Basketball player, sexy, arrogant, always sleeping through class… these are the things I knew about him. What I didn’t know is that he is a seriously smart jock.

Wes
What’s the best way to get rid of the peppy and unrelenting girl that keeps asking me to tutor her? If I knew, I wouldn’t be staring at her tan legs and attempting to teach her statistics.

Sorority girl, fine as f**k, determined, ball buster… these are the things I knew about her. What I didn’t know is that she is all the things I didn’t realize I wanted or needed.

Or that one semester with her would change everything. 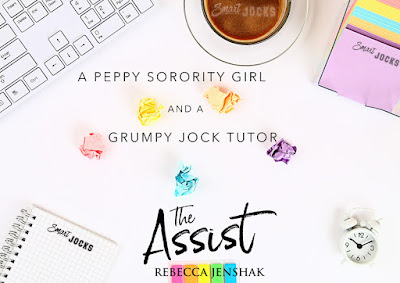 Read my 4.5-starred review of The Assist.

Add The Assist on Goodreads. 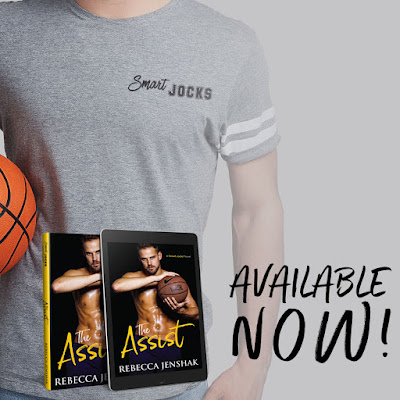 An Excerpt from The Assist
“Rise and shine,” Joel says as he nudges me. I’m not asleep. I wish I were. My eyes are closed, hat pulled down, but there’s no sleep to be had.

“She’s coming back for more.” The tone in his voice is almost inspired.

I don’t have to look up to know who he’s talking about, but I do anyway. She’s the most entertaining thing about this class. Open my eyes and lift the hat, turn it backward so my view isn’t the least bit blocked.

Today she’s wearing little pink shorts that show off tan legs, yellow tennis shoes that don’t match but somehow work, and a bracelet with a little charm around her left ankle. It’s too small to make out, but I stare anyway. Her brown hair is pulled up in a high ponytail, and she has a megawatt smile plastered on her face. A big bow on top of her head is all she’d need to look like head cheerleader of my high school fantasies.

I’m hella impressed by the balls on this chick. She’s put her foot in her mouth, not once, but twice, and damn near insulted the entire student athlete population, but she keeps coming back. She has determination and grit. I admire that about her.

I also am not in the least bit offended by her assumption that I’m a dumb jock. I’d be lying if I said I wasn’t surprised she came right out and asked who my tutor was, but I know exactly what it looks like. I’ve fed into the stereotype for years, doing nothing to make it seem otherwise. Well, nothing but get straight A’s.

“What’s up?” I stand to walk with her out of the class.

“The tutor center was a bust. I know you said . . .” She looks like she’s choosing her words carefully. “Do you have old study notes or tests from previous semesters?”

“Still convinced I’m not capable of passing on my own, huh?”

“I’m sorry, really, no offense. I just want in on whatever study materials you’re using. I can’t afford to fail another test. What’s your secret?”

The secret? I’m fucking smart. Photographic memory smart and statistics is my whole world, but I can’t resist messing with her.

“You know, saying no offense doesn’t make whatever you’re saying less offensive. It just makes you feel better about saying something offensive.”

Joel snickers behind me. I just can’t resist fucking with her. She’s making it too easy.

“Sorry. I’m really so sorry. What about the other guys on the team? Anyone have any awesome math tutors who aren’t available to us non-jock students? I can pay.”

“Couldn’t say for sure, but I don’t think so. Most the guys hold their own academically.” I lean in catching a whiff of her hair. It smells good—like sugar cookies or candy canes or something sugary sweet that I want to sink my teeth into. “Shocking, I know.”

Her shoulders slump in defeat, and I can tell she’s finally accepted that I have no answers for her. At this point, I almost wish I knew of someone to send her to. I don’t exactly travel in circles that clue me in on secret study sessions and underground tutor societies.

“Thanks anyway.” She gives a little wave with the hand clutched around the strap of her backpack.

Joel catches up to me, and we watch as she crosses the campus toward the library. “Dude. That chick . . .”

“I know,” I say, and we continue to stare after her completely awe stricken. 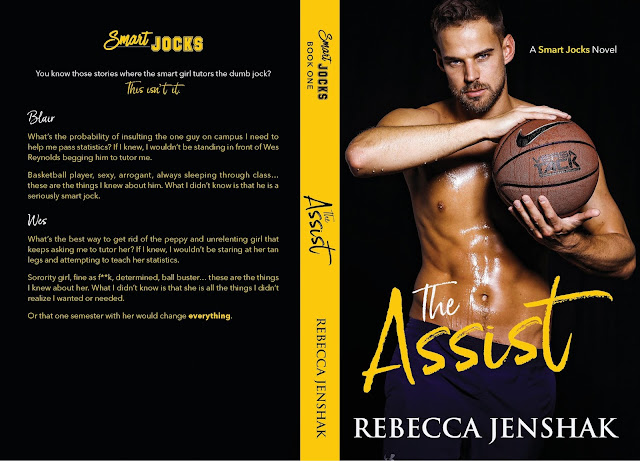 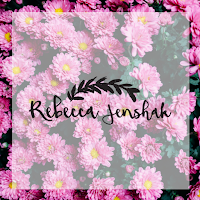 Rebecca Jenshak is a self-proclaimed margarita addict, college basketball fanatic, and Hallmark channel devotee. A Midwest native transplanted to the desert, she likes being outdoors (drinking on patios) and singing (in the shower) when she isn't writing books about hot guys and the girls who love them.