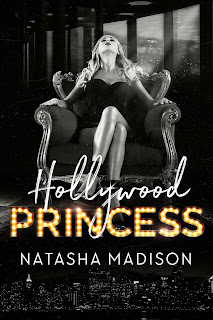 After reading Hollywood Playboy less than a month ago, my expectations were high for the next Hollywood Royalty novel. There were glimpses of singer-songwriter-actress Kellie Hudson and security expert Brian Kitch in the series starter, and going into Hollywood Princess, the obvious tension between them was one of the things I was looking forward to having a front-row seat to all that and see it boil over. To some degree, I got what I wanted, but I was also left wanting but such is life when expectations are quite lofty.

When Hollywood superstar Kellie Hudson is informed that someone has been actively stalking her and that this individual appears to escalating, her management decides it’s time to bring in one-on-one security. It turns out that the person who’ll be shadowing her 24/7 is Brian Kitch, someone who was already Kellie’s once before—the same someone Kellie had a thing for and when she made a move, he rebuffed her advances. Now, they’re stuck together for three months, in close quarters. Brian is going to do his very best to protect Kellie, but who’s going to protect him from the one woman he desires most?

Like I mentioned earlier, I was looking forward to finally getting to read Brian and Kellie’s story, especially because the bits we did get of them in book one were quite enticing. I liked Kellie and Brian, and there was a high degree of chemistry between the two of them. I also liked the suspense aspect, although I did have one and only one person who I suspected was the stalker and I turned out to be right. While I did enjoy the book for the most part, I did have expectations, and some were met, others, not so much. There was a lot of waiting around in the story, both in terms of the romance and the suspense. Petty jealousies, silly assumptions due to lack of communication, etc. got in the way one time too many, and it seemed like the stalker went on a really long timeout before they struck again. I wanted more to happen. The twist regarding Brian did catch me off-guard, so kudos on that. While Hollywood Princess did falter in certain aspects, I did have a good overall reading experience, and I’m still quite excited to read the third book in the series. Four stars. ♥

Read my reviews for the Hollywood Royalty series: