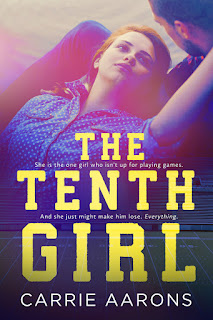 Carrie Aarons returns to young adult (YA) romance with her latest release, and she once again makes me glad that she's one of my favorite go-to authors. The Tenth Girl is the story of seventeen-year-old Harper Posy, who moves from her hometown of the Florida Keys to her mother's hometown Haven, Texas. She's the new girl at the local high school, and it's clear early on who's at the tippy-top of food chain: eighteen-year-old fellow senior and star quarterback Cain Kent. From the moment he nearly runs her over with his vehicle to her putting him in his place during their Honors English class, Harper and Cain are more than aware of each other's existence. Neither one is exactly a fan of the other, but there's an underlying connection that exists between them--one borne out of curiosity and attraction. She's pegged him as nothing more than a jock who thinks he's the king of the world, and he's pegged her as virginal girl who won't be able to resist him. The more Harper gets to know Cain, the more she sees there's more to him than meets the eye; and the more he gets to know her, the more he realizes that the girl he believed would clinch one particular win for him could be the same one who could make him lose...everything.

Ah, Cain and Harper were so much more than I could have hoped for and their story was the perfect weekend read. These two and their whole back-and-forth thing had me thinking of the proverbial the-spider-and-the-fly scenario, and while it may seem that Cain is very much the former and Harper the latter, you could end up wondering if you were wrong, and not in the way you may think! I loved how these two had life goals for themselves, and didn't have the kind of teenage angst that sooooo many other YA romances have. Yes, they had their share of issues, but it wasn't your typical thing that had to do with popularity or not knowing who they were. These two were self-aware, even when it was about the negative stuff. There were a handful of supporting characters who were memorable, but I must admit that Harper's closest friend in Haven and the queen bee with whom Harper shares no love lost, were the ones that had me hoping they'd get their own stories sometime in the future. With every new novel of hers that's come across my tablet, Carrie Aarons has always been able to not just entertain me but to give my romance-loving heart something to squee over--exactly like The Tenth Girl. Five stars. ♥

Purchase The Tenth Girl on Amazon.