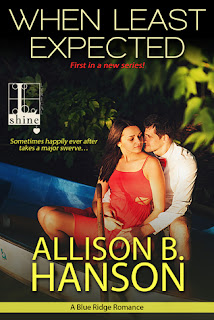 Ian and Alexis Montgomery were supposed to be the kind of couple that would remain together for the rest of their lives. But six months ago, after countless attempts of having a child of their own and falining miserably, Ian walked away from the woman he loved and sent her divorce papers soon after. Now, the death of a beloved uncle brings them together, and amid the awkwardness and hurt, they try to be polite and accommodating, especially when Ian brings his girlfriend with him. When they're informed that the cabin that holds a lot of special memories was bequeathed to them, it becomes a turning point in their lives and soon, they'll have to decide if it's finally time to let go and move forward or to hold on and fight.

When Least Expected is the first book in a brand new series from Allison B. Hanson entitled Blue Ridge Romance. The book begins with the death of Ian's uncle and a man that Alexis considered a father figure. The couple have been divorced for a number of months and Ian had a girlfriend by his side soon after, one that his family does not like or welcome, constantly comparing her to Alexis. A cabin up in the Blue Ridge Mountains is left for the divorced couple in their late uncle's will and they end up spending the weekend there, which provides them the opportunity to engage in all the couple-type things they did when they were still together, but this ends up blurring the line between them and brings forth even more confusion.

I admit it. I didn't like Ian Montgomery. He walked away from his marriage and while his reasoning may seem selfless, it was actually selfish. The man didn't like disappointing his wife Alexis because they couldn't get pregnant after so many tries but that is a poor excuse for ending a relationship. He was a coward and couldn't face up to his feeling of being a failure and walked away from the only woman he's ever loved. The fact that he easily replaced her with a girl (yes, I'm using the word "girl") eight years his junior simply because he didn't like being alone was a very jackass thing for him to do. My opinion of him remained and when it did veer into positive territory, it only did by a a little bit and very close to the end.

I felt bad for Alexis, especially since it was obvious that it was far more difficult for her to move on. I know how Ian's family felt when he and Alexis divorced and how they still continued to consider her part of their family. After all, when someone has been around for that long and has become a true member of the family, it's difficult to let go of them simply because the one who brought them into the family has decided to end things. I really liked Jeremy--whose last name I don't recall being mentioned--and I hope that he gets his own happily-ever-after later in the series because that good of a guy deserves it. Aside from me not liking Ian, I enjoyed When Least Expected and look forward to reading the second book. Four stars! ♥