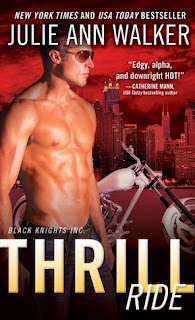 Thrill Ride is the fourth book in the addictive and always thrilling Black Knights Inc. series masterminded by bestselling author Julie Ann Walker. With the connection between them established in the third book, Rev It Up, former Navy SEAL and resident interrogator of Black Knights Inc. Richard "Rock" Babineaux and BKI communications specialist Vanessa Cordova find themselves on the run from CIA operatives trying to locate and bring in Rock after he's burned and accused of assassinating several US citizens. Desperate to keep him safe from those after him and wanting him dead or alive and to clear his name, Black Knights Inc. goes all out to save one of their own even as Rock insists they leave him be and allow no other lives be put in jeopardy because of his past actions. The question is: Is Rock innocent or is he guilty?

Goodness, this book certainly lives up to its title, never letting up on the throttle in terms of thrills and chills, packing every nook and cranny with excitement and tension, action-wise, mystery-wise, suspense-wise, and, of course, romance-wise. Rock Babineaux and Vanessa Cordova have had chemistry ever since they were partnered together in the previous book and now that Rock's been on the run for six months since the events there, Vanessa being the one who came face-to-face with him seemed more than apt. It also proved that the girl is more than just a communications specialist and can hold her own in the world of spec ops that Black Knights Inc. revolves in. These two encountered a lot of challenges while in Costa Rica, but their team members were more than prepared as well, and I loved the camaraderie among them.

Behind his easy smile and Cajun charm, Rock has a rather painful story to tell and it explains why he became part of what was known as the Project. His past also explains why he doesn't allow himself to fall in love with anyone, something he reminds Vanessa of during their time together. Rock is formidable when it comes to anything spec ops-related but he's missing out on being able to truly live a complete life because he simply limits himself when it comes to deeper and more intense emotions. Of course, Vanessa is the first woman in a long time that's inspired those long-buried emotions to come back to life but Rock can be frustratingly rigid in his no-falling-in-love stance. But it's always those characters that claim they'll never fall in love that end up doing so and when they do, it tends to be one heck of a heartrending journey.

Rock and Vanessa were fantastic main characters, both with their respective strengths and weaknesses yet much stronger when they're together. This was a book that showcased that Black Knights Inc. is truly a force to be reckoned with when they're fighting a common cause and nothing stands in their way of protecting one of their own. This was something that was seen in the first book, when they were trying to learn the truth behind the death of BKI member Grigg Morgan, so seeing it here again was definitely one of the best things about this latest installment. The bar has been raised yet again and I find myself looking forward to seeing just how far the Black Knights Inc. can go. Thrill Ride is my favorite as of now but let it be said that each of these books ranks high on my list of favorites. I'm giving this fourth book five stars. ♥