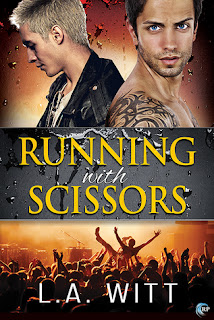 
Running with Scissors is the latest M/M contemporary romance from one of my favorite authors, the multi-pen-named L.A. Witt, and is about Jude Colburn, co-founder and former drummer for the rock band Running with Scissors, and A.J. Palmer, the drummer who takes Jude's place after his sudden departure. They both find themselves trying to fit in with the band but for completely different reasons. They're like two pieces that fit perfectly to form a whole, but will they risk being a band that appears to be destined for stardom and success for a relationship of sorts that's quickly meaning more to each of them?

When Jude receives a call from the band's manager, he finds himself with an opportunity to return to the band he loves and to go back to being what he was meant to be--a musician. Unfortunately, the band isn't too thrilled about the instant reunion because of what Jude did to them, but they're desperate for someone to replace the bassist who ended up leaving for the same reason as Jude before him: the band co-founder and vocalist who just happens to be Jude's ex. There's a no sleeping with someone in the band policy but the pull A.J. is something that Jude can't walk away and the mutual feeling is blatantly obvious.

Both Jude and A.J. come off as outsiders, but that's not the only thing that makes them kindred spirits. There's a love and respect for the music they both love to perform and be part of that highlights how passionate they are to be members of Running with Scissors. The one thing that rivals that passion is how they are when they're together, but the band's been put at risk two times to many and choices have to be made as to where Jude and A.J. will go once the secret affair they're having comes out. These two aren't merely about sex because there's an honest to goodness connection that makes them seem meant to be.

Author L.A. Witt makes you feel as if you're really on the tour bus with Running with Scissors and nothing is sugar-coated about how hellish it can often be to be stuck on one for weeks on end. She's come up with a story that isn't merely about two guys who are part of the same band hooking up and then developing feelings for each other. Yes, the book is about Jude and A.J.'s love story, but it's also about this love for music and it gives readers the various stages involved in making said music. The story is complex, what with the need for forgiveness and redemption and actually knowing when something is worth fighting for.

Aside from Jude and A.J. evolution as strangers who are part of the same universe to partners discovering something or someone that rivals their love for music, the book delves into the relationship among the six band members. Each one has their role in the group that isn't limited by the instrument they play and the fractured relationships that the four others have with Jude makes it glaringly clear exactly how devastated they were about his walking away from them, both personally and professionally. Running with Scissors is so much more than a rock star romance and it was one that enjoyed immensely. I'm giving this five stars. ♥