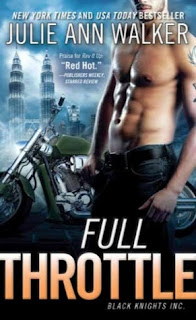 Full Throttle is the seventh book in the always exciting Black Knights Inc. series penned by none other than Julie Ann Walker and takes places in Malaysia before it shifts back to the United States much later in the story. Carlos "Steady" Soto and Abigail Thompson have known each other since he was twenty-four and she was eighteen. The death of Steady's twin sister Rosa during a bombing on campus led him to quit medical school in order to join the military and he and Abby went their separate ways only to find themselves thrown together eight years later. Abby is now the daughter of the President of the United States and Steady, as a member of Black Knights Inc., works for him. When Abby is kidnapped by militants in Malaysia, Steady does whatever's necessary to rescue the woman who's owned his heart for eight years.

Carlos Soto and Abby Thompson have had feelings for each other from the time they first met through Carlos's sister Rosa. But with the six-year age difference, a big deal when one happens to still be a teenager, and a year later, Abby's being the daughter of a potential presidential candidate, Carlos doesn't pursue his feelings. When Rosa is killed in a bombing where Abby was meant to be the target, their lives go in different directions and Carlos walks away thinking Abby rejected him and Abby is left with a great deal of guilt because of what happened to Rosa. Being assigned to watch over Abby while in Malaysia and then later having to rescue her brings their long-kept feelings to their forefront, but Abby is keeping something from Steady and she fears that secret could derail whatever progress the two have made relationship-wise.

This story was quite interesting because it involved a presidential daughter and the fact that this presidential daughter had a thing for someone who is now part of the Black Knights Inc. nearly a decade ago and still has a thing for him now. This also had an air of familiarity to it because of those involved in the kidnapping and with me living in the Philippines, it definitely made me sitting up straighter and taking notice. Steady and Abby's love story had a second chance romance feel to it, though with everything that happened to them eight years ago, this was more of them finally taking a chance on whatever was going on between them. The story is two-fold: the kidnapping and rescue and then the revelation of Abby's eight-year-old secret. The former was a tad more interesting than the latter but still an overall very good read.

As is the case with all the books in the Black Knights Inc. series, there was a side story here and one that I was quite happy about because it involved Dan Currington, whose tale has been quite tragic if you've been following the series like I have. Of course, this heightened my excitement for the next installment in the series, which will be focused on Dan and his new lady love, Secret Service Agent Penni DePaul. These side stories always provide that something extra that I've come to expect and look forward to with the BKI books, leaving me wondering each time if they'll get their story told next or if I'll have to learn to be patient until they get their turn. Every single book so far has left more highly satisfied and entertained and Full Throttle fit the bill when it came to the standard set by the Black Knights Inc. series. It gets four stars. ♥