Review: The Entity Within by Cat Devon (Entity #2) 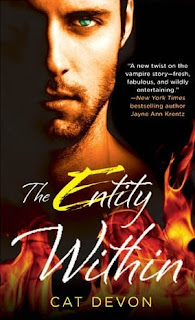 Zoe Adams and her grandmother are forced to leave Boston to find sanctuary in Chicago and they find it in a place unofficially called Vamptown. The fact that they're witches has the head of security for the area instantly on alert and distrustful of the two, but then Damon Thornheart knows from experience just how conniving a witch can be. However, the vampire demon hunter soon finds himself needing to protect Zoe and her grandmother from demons that are roaming Vamptown, demons that are after the two. Damon and Zoe will have to work together if they have any chance of vanquishing the demons before it's too late.

The Entity Within is the second novel in the Entity series from author Cat Devon and has a vampire who just happens to be a demon hunter locking horns (pun intended) with a witch who hasn't practiced her craft in two years. Damon Thornheart makes it pretty clear that he doesn't trust Zoe Adams or her grandmother and that he would rather have them as far away from Vamptown as possible. But when a Book of Darkness inexplicably appears and then disappears and demons run amok, the two form an unlikely alliance to defeat whoever's behind it all while finding themselves even more drawn to each other.

This was a good sequel to the first book, Sleeping with the Entity, even though both main characters are new to the series. There are still the same familiar faces from the Vamptown area and the same humor is inserted in the story amid the tensions rising between Zoe and Damon. One of my favorite new supporting characters is Zoe's familiar, a witch turned cat named Bella, who is still very much the Russian aristocrat she once was even in feline form. The story does have the same unlikely union (vampire and witch) that the first one had (vampire and druid), but The Entity Within remained a good overall read. Four stars! ♥

Purchase The Entity Within on Amazon | B&N | Kobo.