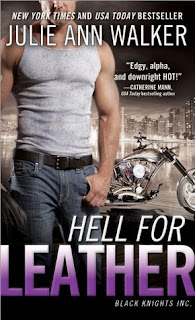 Hell for Leather is the sixth novel in the romantic suspense series Black Knights Inc. from bestselling author Julie Ann Walker and deals with Black Knights Inc.'s Bryan "Mac" McMillan and owner slash bartender of Red Delilah's Biker Bar Delilah Fairchild. Delilah's had a thing for Mac since she first saw him enter her bar four years ago but he's made it abundantly clear that he isn't interested and tends to brush off any kind of flirtation and call for attention. But when Delilah's beloved uncle goes missing, Mac and other members of BKI readily agree to help. What starts off as a seemingly simple case of an elderly man disappearing becomes something far more complicated and is connected with national security. Delilah's life is put in danger when her uncle's abductors intend to use her for leverage and Mac vows to protect her.

Delilah Fairchild's bar is a favorite haunt for the operatives of Black Knights Inc. and she's always loved being in the bar and spending time with her customers. But after the murder of her most loyal customer a few months ago, Delilah is spending more time away from her bar, a fact that Mac McMillan quietly notices. Mac's been attracted to Delilah for years but he refuses to fall in love with a woman like her so he tries to keep his distance. When she asks him and BKI for help in locating her uncle, the two finally end up spending more time together and somewhat giving into their attraction. Compared to Mac, Delilah openly acknowledges just how much she wants Mac but it isn't mere lust anymore, evolving into deeper feelings.

Mac's issues with regards to a particular type of woman--the type he believes Delilah is one of--is based on a past that was rather painful and had lasting ramifications on him. When the past is first revealed, I thought of one thing but was rather surprised later on to learn that it was a bit different than I initially believed. Even though it's clear that his own feelings for Delilah are more than he lets on, he refuses to do anything about it, sticking to the idea in his head that he could never be with a woman of Delilah's persuasion. I swear, I wanted to smack the guy upside the head a few times, but someone I wanted to give an extra-long hug to was Dagan Zoelner. The guy's introduction to the series in the first book was like a trial by fire sort of deal but he's such a BKI team member now and I love what he did for Delilah and Mac.

Fans of the series are already familiar with BKI's feline mascot, Peanut, who has been described time and again as being less than physically appealing and yet seems to be irresistible to the ladies of BKI. Here, we meet Fido, a Labrador with a slightly weird sounding bark but a four-legged hero that stole my heart. I actually shed a tear at one point in the story because of the furry cutie. Then there's also the whole Dagan Zoelner-Chelsea Duvall side story that certainly piqued my interest, though there was already a smidgen of something more about the two of them in the first book as well. Overall, I loved Delilah being as strong of a female lead character as she was, especially in that confrontation she had with Mac, and Fido was a scene-stealer all throughout. The series continues to be a blast and I'm giving Hell for Leather 4.5 stars. ♥