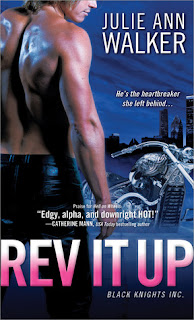 Rev It Up is the third book in the romantic suspense series entitled Black Knights Inc. from author Julie Ann Walker and shifts a bit, with the focus on two people close to Black Knights Inc. leader Frank "Boss" Knight but neither being an actual team member--Jake "the Snake" Sommers (who I assume is about Frank's age) one of Frank's best friends and former SEAL teammates, and Michelle Knight Carter, a thirty-four-year-old single mother and Frank's younger sister. Shell is the widow of Steven "Preacher" Knight, another member of Frank's SEAL team, but she and Jake used to be in somewhat of a relationship, one that was never consummated though they came close to it one night. Jake's return signals his intention to pursue a relationship with Shell, the only woman he's ever loved, in hopes that she's willing to reciprocate.

The events here take place the day after the end of the second book, In Rides Trouble, which had Jake Sommers walking into Black Knights Inc. headquarters and lay claim to Shell Knight Carter. His two closest friends and former SEAL teammates, Frank Knight and Richard "Rock" Babineaux, are there to welcome him as well as support him in his quest to win back Shell's affections. But with her now being a widow and a mother to three-year-old Franklin, Shell has other priorities and cannot simply forget what happened when Jake shut her down four years ago and walked away from her as well as not replying to her written plea that he written two years ago to her, Frank, and Rock. Declarations of love and intentions are cast to the wayside by bounties on the heads of BKI members and threats made against their loved ones.

If book one was a falling-for-your-best-friend's-sister story and book two was a bit of a friends-to-lovers or a frenemies romance, book three definitely had the second chance romance vibe going. Jake had his reasons for pushing Shell away and toward Steven that night at the bar that changed both their lives and while it was kind of petty of him to treat her the way he did four years ago when she tried to talk to him at the base, his feelings for her have never changed. Theirs appears to be a story of missed chances and mixed signals, but I do get where Shell's wariness toward him comes from. When an essential piece of information finally comes to light, hurt feelings are more than understandable, though if these two communicated better instead of shutting down or staying away then the need for secrets wouldn't exist.

Now, there's something that happens in the story that I won't get into in the review because I don't want to spoil the story for those who have yet to read this book. Let's just say that my curiosity got the better of me and I did a bit of Googling to see if what was presented here was actually feasible and while experts say it's unlikely, the remote possibility of it happening exists, as proven by rare cases. So, hooray for Google and hooray to Julie Ann Walker for adding something I've never come across in any other books I've ever read. This was a good story and one that stands out from the rest because of the more domesticated feel of it but still had the action and suspense that you want from a book in this genre plus enough romance and steam to keep the romantics out there satisfied. Rev It Up was an enjoyable read and receives four stars. ♥